LAOS: More than 1,000 youth have received an education from the Don Bosco Vocational Training Center 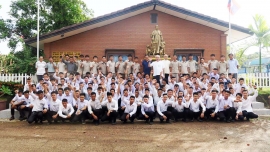 (MissionNewswire) More than 1,000 youth from every region of Laos have received an education at the Don Bosco Vocational Training Center located in Vientiane, the capital of the country. Father Patrizio Maccioni, director of the center, notes that the institution is the only Salesian presence in Laos.

Salesian missionaries first began working in Laos in 2004 when an Italian Salesian missionary, Father Tito Pedron, a teacher and five past pupils of a Salesian vocational training school in Thailand launched what they called, the Laos Project. The project began with 12 students and by the second year, enrollment had doubled. When inspectors sent by the Ministry of Labor visited, they were impressed by the professionalism of the teachers and the level of student learning.

The Don Bosco Vocational Training Center has been recognized by the Laotian Youth Union Department, a youth organization of the Communist party, which showed great interest in the education provided. In 2008, the center moved to its current location and the collaboration with the Laotian Youth Union was ratified by a contract for five years, renewable every five years.

Currently, the Don Bosco Vocational Training Center educates about 150 students each year who come from every province in the country and are mostly poor. According to the contract with the Laotian Youth Union, the union, together with Salesian missionaries, select the students who will attend. Priority is given to those living in challenging economic situations and those with insufficient school preparation, such as having dropped out of school just after elementary school. Students are selected after completing a written test and an interview.

Once admitted to the center, youth are able to choose from a wide range of courses, all aimed at providing the professional skills and vocational preparation that will allow them to enter the workforce. Courses for mechanics and electricians last one year and accommodate about 40 students per discipline. Courses on welding and motorcycle repair last six-months.

The Don Bosco Vocational Training Center has proved to be a vital resource for the poorest families in Laos. Government agencies and local authorities often express their appreciation for the center. According to data from the Laotian Youth Union Department, about 75 percent of the boys who completed their studies there have found work.

The economy in Laos has been rapidly growing. Not only is the country the fastest-growing economy in the East Asia and Pacific region but also in the world. The growth can be attributed to the fact that Laos is home to a bounty of natural resources that include water, minerals and forests. Additionally, construction and services have expanded and contributed to an increase in tourism and foreign investment.