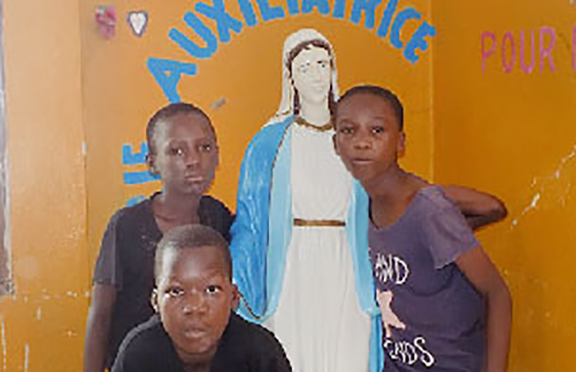 (MissionNewswire) Salesian Missions donors have provided funding for the Don Bosco House in Abidjan, the economic capital of the Ivory Coast, to build a psychological care center where trained educators will help youth work toward emotional healing and well-being. The Don Bosco House provides programs for street children and other at-risk youth, many of whom have experienced abuse and violence.

The government of the Ivory Coast, in collaboration with UNICEF, conducted a study into child abuse in the country and found that 86.5 percent of children between the ages of 1 and 14 have been victims of violent disciplinary action including psychological, emotional or physical abuse.

Salesian missionaries have been working with poor youth and their families in Abidjan for more than 25 years. They provide social development services, education and workforce development to help youth break the cycle of poverty and become contributing members of their communities. To help respond to the issues of violence against children, the Salesian community of Abidjan provides several programs and awareness activities related to the protection of children including launching this new psychological care center.

“Salesian missionaries living and working in cities across the Ivory Coast focus their attention on working with youth in need and their families to provide education, food security, health clinics and workforce development services,” says Father Mark Hyde, director of Salesian Missions, the U.S. development arm of the Salesians of Don Bosco. “Youth who are able to access the psychological care they need are able to become emotionally healthy adults and contributing members of their community. We are thankful for our donors who are helping Salesian missionaries in the Ivory Coast build this center.”

According to the World Bank, 46 percent of those living in the Ivory Coast live in conditions of poverty—with more than a quarter of the population living in severe poverty on less than $1.25 a day. The Ivory Coast has one of the highest HIV/AIDS prevalence rates in West Africa. While a wide range of national and international initiatives focus on HIV/AIDS awareness, prevention and testing, the collapse of public health facilities in the north as a result of years of conflict has made the situation worse.

During the country’s time of war, Salesian missionaries provided life-saving shelter, food and security for the thousands fleeing violence and seeking refuge on Salesian grounds.

Today, Salesian missionaries continue their work providing shelter, education and social development services to youth and their families. They also work with the victims of war to heal the country’s deep wounds. They listen, help victims seek compensation and work for social reconciliation between opposing groups. Known for their work with child soldiers around the globe, Salesian missionaries are also providing training for youth, some who had been aggressors during the war.