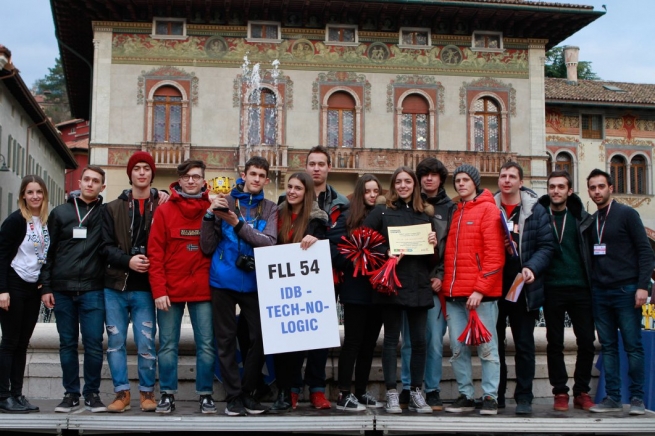 (MissionNewswire) Youth who attend Salesian schools often distinguish themselves by being able to devise scientific and technological projects that help to build more inclusive and supportive societies.

Students from the Salesian Institute in Verona, Italy were winners of the 2018 First Lego League Italia. The team’s project, “Idb Tech-No-Logic,” ranked first in the national competition and the students have advanced on to participate in the world final in Detroit, Michigan on April 25-28, 2018.

The finalists in the national competition challenged each other in robotics competitions and in scientific projects that had water as its main subject. Regarding their own project, the students from the Salesian team explained, “Seventy percent of the world’s drinking water is used to irrigate and comes mainly from the public aqueduct or wells. To reduce waste, we decided to take advantage of rainwater, which would normally end up in sewers, and recreate a series of structures commonly found in cities or near gardens with specific criteria to obtain the greatest possible capacity for water collection.”

The Salesian team, formed by 10 students and guided by Luca Zanetti, a computer science teacher, dominated the robotics race coming in 30 points ahead of the team that comes in second. Last year, the team also qualified for the First Lego League International Open in Bath, England.

In Spain, Salesian students also have a focus on technology. Students took part in the 31st Premio Nacional Don Bosco. One project, “BMiCMiC,” by students Alicia Moraza and Daniel Gil, led by Professor Diego Villar Cárcamo, won two of the most prestigious of the 14 prizes awarded by the competition. The students won the First Special Prize of the Festo firm and the Special Prize of the Ministry of Defense.

“BMiCMiC” consists of a trunk and bionic arms, produced through 3D printing, which allow users to manipulate objects at a distance. The prototype is able to replicate the movement of arms, hands and fingers and to imitate the user’s movements, proving extremely useful for managing drones, defusing bombs or performing remote surgeries.

“Salesian programs aim for innovation and help marginalized communities have the education and resources they need to find, and even create, long-term employment that will help them break the cycle of poverty,” says Father Mark Hyde, director of Salesian Missions, the U.S. development arm of the Salesians of Don Bosco. “This and other science and technology projects and competition help Salesian students to be competitive in the labor market or develop their own businesses to gain financial security.”

ANS – RMG – Young scientists at the service of the common good