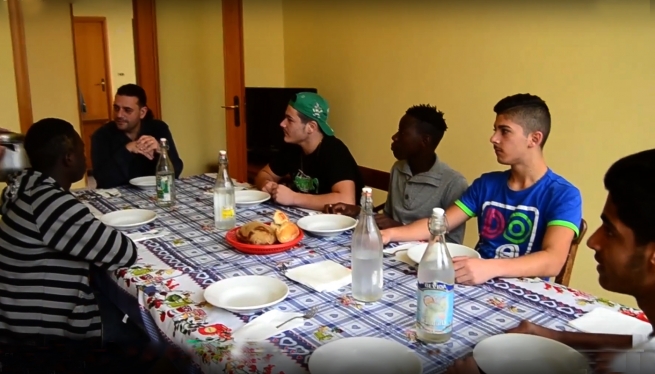 (MissionNewswire) The Salesian family community known as “The Dream” was developed in Naples, Italy in December 2006. The Salesian House was developed to provide shelter, basic needs and education to young men living in poverty and new to the community. Over its 10-year history, hundreds of young men have found a home at the Salesian program as well as discovered new hope for their future.

Christian has been in the Salesian community for about two years. Although he was overwhelmed when he first arrived by this new environment, he now feels like it is home. He has a roommate that he would not change, and through the community, he has learned the meaning of friendship. Through the support of his peers and Salesian missionaries, Christian now dreams of becoming a pastry chef.

Another young man in the Salesian House, Vittorio, has been there for only five months. He loves music and singing and hopes one day to become a pizza chef. In the Salesian House, he not only found a bed but also learned some important lessons. When asked what he would most like to change in the world if he could, he responded without hesitation that he could change himself.

Christian and Vittorio have two companions in the Salesian House with them. Mustafa and Suad found it hard to settle in at first with so many changes from their home country but both have become adjusted and are doing well. They have learned the Italian language and even the local dialect. Within the community, they have their own preferences when it comes to food and are teaching others about their culture while they learn about the Italian culture.

“The Salesian House in Naples, along with Salesian schools, youth centers and vocational training programs in Italy, is educating poor youth and providing important social and vocational skills,” says Father Mark Hyde, executive director of Salesian Missions, the U.S. development arm of the Salesians of Don Bosco. “The goal is to provide youth with the basic necessities so they can gain the job skills needed that will bring them livable wage employment and the opportunity to give back to their communities.”

Europe’s third-largest economy, Italy has close to 2 million children living in poverty, according to UNICEF. The poverty rate has risen in the wake of Europe’s economic crisis and unemployment is at its highest level since the late 1970s, with the overall jobless rate at 12.5 percent and youth unemployment as high as 41 percent.

Some youth are unable to attend school and others drop out to work at the few jobs available to them. A growing number of children work as laborers on farms and others have turned to the sex trade to help support their families. Those in poverty often live without adequate shelter, hot water, regular meals and health care. According to UNICEF, a growing number of youth are living away from their families in temporary shelters and within government and charity programs because of inadequate support from or neglect by their families.