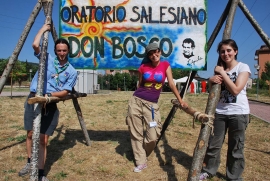 (MissionNewswire) Between 2015 and 2016, the National Service for Youth Ministry of the Italian Bishops’ Conference provided a questionnaire to verify the number of oratories present in each Catholic diocese and the services they offered. They utilized the market research firm Ipsos Italia. Researcher and president of Ipsos Italia Nando Pagnoncelli created and deployed the study and the results show how vital these services still are to communities. Pagnoncelli had his own experiences growing up and receiving services from a Salesian oratory.

“From the age of 6 to 12, I played in the oratory, prayed, attended catechism and cinema. I began to mature many of the passions that are still with me as an adult. Around 13 to 14 years, the parish priest educated us to observe the neighborhood, to take on the problems of others, to participate in our communities,” said Pagnoncelli.

The research showed that there are 5,637 oratories, parish centers and youth associations. It is estimated that there are actually more than 8,000 across Italy, as some in northern Italy were not surveyed because they are annexed to parishes. In the south, several of the oratories are connected with Salesian missionaries and Salesian sisters with Daughters of Mary Help of Christians.

Almost all of the oratories have an educational component to them to ensure youth are staying focused on their studies. The research showed that 88 percent of the dioceses have their oratories open every day and offer a range of activities from games and sports to training and after-school activities, including volunteering, school-camps and pilgrimages. Ecological-environmental activities amount to only 25 percent of the activities, but many want to focus more time in this area. The size of the oratories and structures vary. For some it is only table soccer and a small outdoor field, while for others there is a kitchen with a dining room and rooms for cinema, theater, music and web radio.

Overall the data shows that oratories represent a safe haven for youth that answers the needs of families, children and local institutions. Some oratories have even designed and launched programs that help foreign minors with integration into their new communities.

One Salesian oratory, operated by the Salesian Small Steps Big Dreams Association, provides services to youth to aid them in their studies and provides enjoyable after school activities. There are 130 youth between the ages of 6 and 17 years old who participate in the project including six youth who had dropped out of school for more than a year and are preparing to return to school for the eighth grade. Youth involved in the project come from several cities in Naples including Torre Annunziata, Boscoreale, Boscotrecase and Trecase.

Through the project, youth are supported in their studies and engage in recycling workshops and pottery, football, volleyball, handicrafts and painting on glass. Youth spend time after school working on their homework and being tutored in subjects where they struggle. The project provides a safe, supportive atmosphere run by several Salesian educators.

“Many youth need the extra support to do well in school and this project provides that, along with so much more,” says Father Mark Hyde, executive director of Salesian Missions, the U.S. development arm of the Salesians of Don Bosco. “Through the project, youth are able to connect with their peers while learning new skills including the arts and sports, which teach teamwork, problem solving and socialization skills.”

In Italy, Europe’s third-largest economy, close to 2 million children live in poverty, according to UNICEF. The poverty rate has risen in the wake of Europe’s economic crisis, and unemployment is at its highest level since the late 1970s with the overall jobless rate at 12.5 percent and youth unemployment as high as 41 percent. Some youth are unable to attend school and others drop out to work at the few jobs available to them. A growing number of children work as laborers on farms and others have turned to the sex trade to help support their families. Those in poverty often live without adequate shelter, hot water, regular meals and health care.

ANS – Italy – There once was, and there still is, the oratory