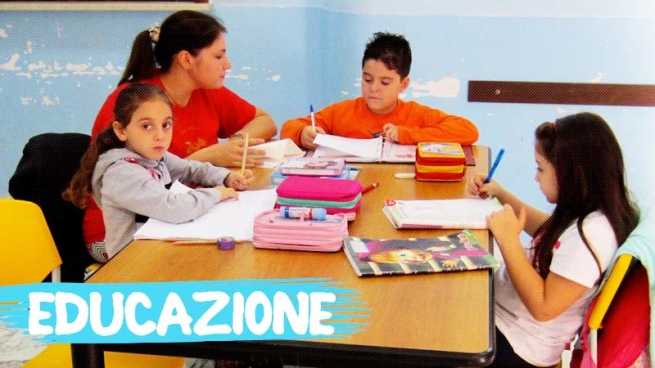 (MissionNewswire) Salesian missionaries with the Salesians of Social Welfare, also known as the SCS/CNOS Federation, are impacting Italian youth and their families through the Don Bosco House project. The school year has started again in Italy but many youth lack the educational opportunities needed to succeed. According to Salesian missionaries working in Italy, more than 1.3 million children live in absolute poverty and more than half of them are not able to read. One in three are not able to access the internet and 40 percent do not play a sport or have access to recreation.

Salesian missionaries note that in many cities and towns in Italy there is a lack of educational opportunities for poor youth as well as a lack of spaces to participate in artistic, cultural and social activities. The Salesian Don Bosco House project aims to remedy this situation by guaranteeing youth educational support and by providing opportunities for them to engage in extra-curricular activities like art workshops, music courses and sports.

Don Bosco Houses are located in many at-risk neighborhoods in Italian cities. There is a Don Bosco House in the Candelaro district of Foggia, the Sant’ Agabio of Novara and in the city of Locri. These are popular working-class areas where the school dropout rate is very high.

Last year, thanks to the Don Bosco House, several secondary students who are a part of the local Cassiopeia Association in Novara, were able to access school support, after-school activities, art and musical workshops and literacy courses for foreign minors. Attilio Sartirani, president of the association said, “We closed last year with good news. Almost all the students we followed during the year were promoted.”

Thanks to the contributions of many donors, the Don Bosco House project will also be available at the Salesian oratory in Modica this year. Daniele, who is responsible for the oratory said, “We hope this journey is made of joy and lots of smiles. We will provide the children with a great environment and enthusiastic staff, and above all, the special formula that characterizes our home including joy, goodness and no space for malice.”

The Salesians of Social Welfare organization has been working to promote a better quality of life for disadvantaged youth for 24 years. In 2016, close to 9,000 at-risk youth received educational and social development services through Salesian programs throughout Italy under the organization’s direction.

The primary recipients of this support are minors and youth who are in situations of social vulnerability including those under the care of Italy’s child protection system. Many of these youth are engaged in Salesian programs that include family child care homes and community housing, childcare centers for academic support, youth groups and foster parent networks.