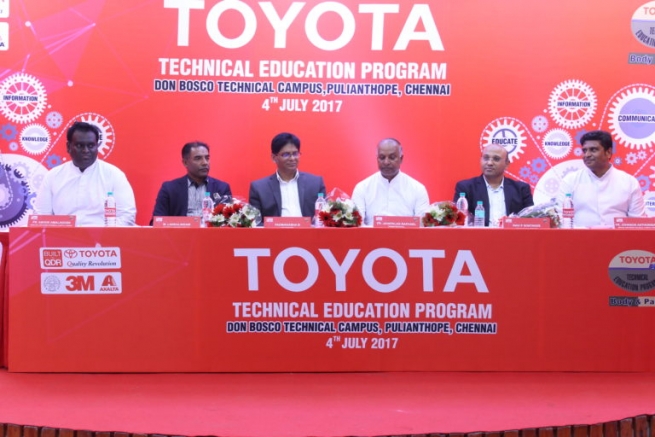 More than 240 students in Tamil Nadu have been trained by Toyota through this one-year program with more than 80 percent recruited by Toyota dealers after their successful graduation. Since the initial launch of the program in 2006, T-TEP has developed 48 training institutes in 17 states across India with 6,750 students trained. More than 60 percent of these graduates were recruited into stable employment within Toyota’s dealerships.

The aim of the program is to create a pool of talented and skilled professionals for the automobile industry while ensuring that youth from disadvantaged backgrounds have opportunities for gaining stable employment. Toyota Kirloskar Motor intends to enhance the technical abilities and employability of students who are 16 to 18 years old.

“It is an honor to be associated with Toyota through this unique program,” said Father Johnson Anthonisamy, rector of the Don Bosco Technical Campus at the launch ceremony of the program. “Our institution’s mission is to give quality education and we see this partnership as a great opportunity to train students to become highly skilled potential employees. The new curriculum will also offer another dimension to the already comprehensive automotive technology program we offer at our institute.”

For poor youth who lack access to education and skills training, risk of exploitation in the labor market increases as does their chance of continuing to live in conditions of poverty. The current automobile repair industry in India is characterized by an inadequately skilled workforce and a lack of professional training opportunities for repair and diagnostics. The Toyota training program will enhance the technical abilities and employability of its trainees.

“At present, there is a huge skills gap in the automotive repair industry in India,” says Father Mark Hyde, executive director of Salesian Missions, the U.S. development arm of the Salesians of Don Bosco. “This partnership is meant to address the rise in youth unemployment while providing Toyota a skilled employable workforce. Students will now have access to training and education that will lead directly to long-term stable employment.”