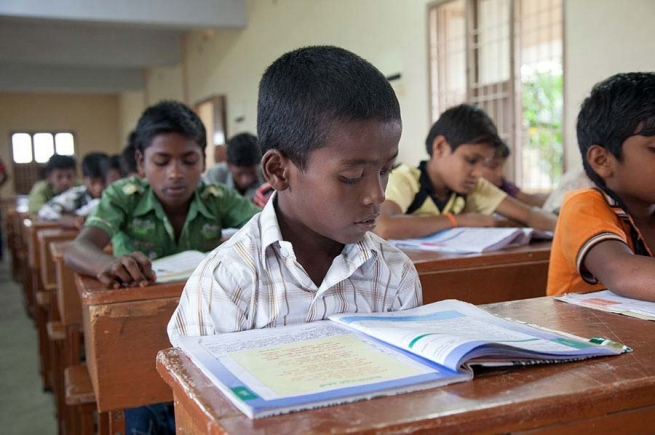 (MissionNewswire) Salesian missionaries in Garigaon, a small settlement located in a strongly tribal region in the state of Assam, operate an elementary school with a kindergarten program that accommodates up to 700 children. Most of the people living in Garigaon belong to different ethnic groups and came to the settlement as migrants, either because they had abandoned their homes of origin in search of a job or because the lands they cultivated were expropriated. The living conditions of these families have not improved after migration, and they are still struggling with the long-term effects of displacement.

Salesian missionaries of Guwahati have been active in the area for many years. When migration from tribal areas began, the village streets were filled with very young children who spent their days outdoors, unsupervised and with no care. In 1988, Salesian missionaries constructed a kindergarten, which over the years also developed into an elementary school on the same complex. The school aims to provide education and structure for vulnerable children of tribal origin.

“Youth in every region and in every culture around the globe should have access to education,” says Father Mark Hyde, executive director of Salesian Missions, the U.S. development arm of the Salesians of Don Bosco. “Through educational programming, Salesian missionaries fight tirelessly each day to make sure the voices of marginalized youth are accounted for and heard.  Education is the first step out of poverty for youth and a chance for them to gain early skills for later skills training and employment.”

The school is not without its challenges though. Salesian missionaries are working right now to find the funding necessary to make improvements to the school, including a new roof and a building expansion. Three new classrooms are needed to accommodate the growing number of students who want to access education in the community. In addition, new desks and chairs are needed because children currently attending classes have to sit on the floor, a problem that becomes more severe during the monsoon season, when the classrooms flood. The school is also looking to increase both the number of teachers at the school and their access to continued training.

Youth in India, especially those living in poverty, are faced with child abuse, neglect, exploitation and forced child labor at an alarming rate, according to UNICEF. India has the largest number of child laborers under the age of 14 in the world, and many are forced into dangerous occupations and live on the streets. In 2010, India passed a landmark law mandating that all children between the ages of 6 and 14 be in school, but according to UNICEF, millions of children remain in the workforce. Full implementation of the law was to go into effect in 2013, but child workers can still be found in almost every industry in India. The problem is enforcing the law, particularly in high poverty regions of the country.

With more than 400 million poor people, or one-third of the world’s poor, according to UNICEF, ensuring youth have access to education in order for them to find stable employment at the appropriate age and break the cycle of poverty is a priority in the country. Although more than 53 million people escaped poverty between 2005 and 2010, most remain vulnerable to falling back below the poverty line.

ANS – India – The mission of the Salesians in Garigaon: a better school for vulnerable children