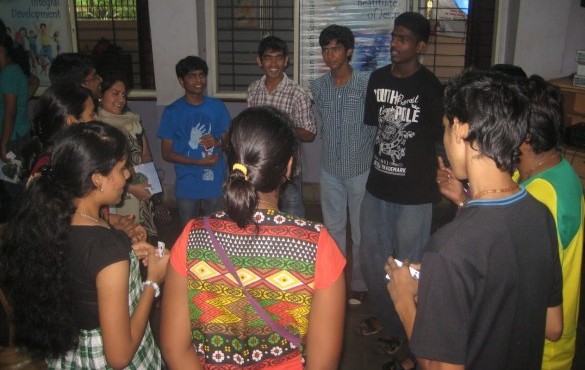 (MissionNewswire) Recently, 140 school children representing 63 human rights clubs from 55 schools participated in a two-day event in collaboration with juvenile justice professionals from the police and courts in the Srikakulam and Vizianagaram districts of Andhra Pradesh. The event focused on the children’s right to be heard, a basic right established in India’s Convention on the Rights of the Child.

Youth focused their stories on positive events that have taken place since the focus on child rights began. One student spoke of how his club’s conversations with school authorities resulted in better quality mid-day meals. Another spoke of a rally his club conducted on World Environment Day which led to the school sanctioning a new wall around the compound and a program to get school dropouts back to class. Others highlighted their club’s effort to clear debris left in the wake of cyclone Hudhud and the sanitation issues at their schools.

The students concluded the event by addressing concerns that continue to affect their schools. Concerns included a serious need for more classrooms, clean safe drinking water and better sanitation as well as a wall surrounding the compound that houses one school, without which, the school is vulnerable to theft and other criminal activity at night.

“Protecting all children in our care is not just a responsibility, it is a priority and events like these allow youth to speak directly to the government officials who can make a difference in their lives. They also demonstrate the Salesian commitment to the welfare, protection and empowerment of children,” adds Fr. Hyde.

Youth in India, especially those living in poverty, are faced with child abuse, neglect, exploitation and forced child labor at an alarming rate, according to UNICEF. India has the largest number of child laborers under the age of 14 in the world and many are forced into dangerous occupations and live on the streets. In 2010, India passed a landmark law mandating that all children between the ages of 6 and 14 be in school, but according to UNICEF, millions of children remain in the workforce. Full implementation of the law was to go into effect in 2013, but child workers can still be found in almost every industry in India. The problem is enforcing the law, particularly in high poverty regions of the country.

UNICEF also notes that millions of girls in India face discrimination, exploitation and sexual and physical abuse because of their age and their gender. A recent UNICEF report, “Hidden in Plain Sight 2014”, details the incidence and prevalence of interpersonal violence against children and highlights global figures and data from 190 countries. The UNICEF report notes that violence against children is often so prevalent and deeply ingrained in societies that it can go unseen and is many times accepted as the norm.

Because physical and sexual violence is hidden from public view and tolerated in some societies, it is challenging to gather true statistical data on the magnitude of the problem. In India, a total of 48,338 child rape cases were recorded from 2001 to 2011 but researchers are aware that many more cases go unreported. Fear of social stigma and further victimization often stop children and their families from reporting these crimes.

With more than 400 million poor people, or one-third of the world’s poor, according to UNICEF, ensuring youth have access to education in order for them to find stable employment at the appropriate age and break the cycle of poverty, is a priority in the country. Although more than 53 million people escaped poverty between 2005 and 2010, most remain vulnerable to falling back below the poverty line.

Salesian missionaries in India operate more than 200 child rights centers throughout the country. The goal is to ensure that youth are aware of their basic human rights as well as the resources available for prevention and ongoing support. Since 2008, People’s Action For Rural Awakening (PARA) in partnership with the Institute of Human Rights Education has been in the forefront of bringing human rights education to government schools in the Indian state of  Andhra Pradesh on the southeastern coast. The effort also extends to schools in the neighboring state of  Telengana. PARA’s advocacy efforts with the government have resulted in over 167,000 government teachers trained in human rights education. In addition, human rights lessons have been added to mainstream state school text books.

“Youth in every region and in every culture around the globe are entitled to basic human rights,” says Father Mark Hyde, executive director of Salesian Missions, the U.S. development arm of the Salesians of Don Bosco. “Through educational programming, Salesian missionaries fight tirelessly each day to make sure the voices of marginalized youth are heard and accounted for. Child rights programs help to enhance this work and make sure every child knows his or her human rights.”