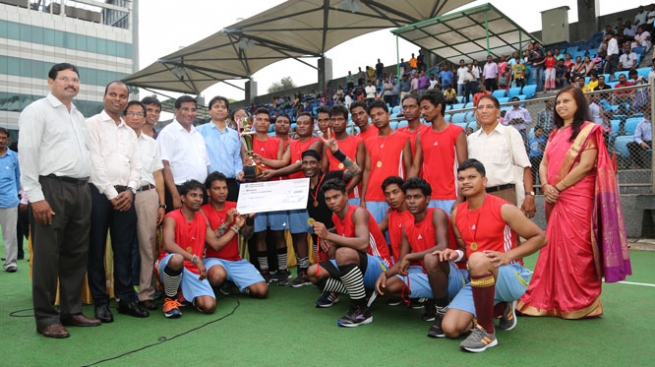 (MissionNewswire) In July and August, the Salesian-run Bosco Enhancement Services for Tribals (BEST) set up its second hockey league competition exclusively for migrants. The tournament is utilized as a way to engage migrant youth in sports and help identify youth who might be in need of educational and workforce development services. It is also a popular tournament that helps to bring awareness to the Salesian organization.

Thirty-two teams participated in the tournament with Energetic Club and Milizuli locking horns for top honors in a tightly-contested final at Shivaji Stadium in Delhi. Veteran players over the age of 40 also participated in an exhibition match to showcase their skill. Nearly 2,000 spectators were present at the venue and treated to a contest of high-caliber hockey as both sides attacked and countered in a bid to score. Milizuli eventually trumped its opponents, via a penalty shoot-out, after both sides tied 4-4 in regulation time.

”We Adivasis have been playing hockey since our childhood. Now, through this yearly tournament, we get a chance to continue to play the sport. We look forward to playing it every Sunday during the tournament and practice in playgrounds and parks for the tournament,” says Dileep Barla from team Milizuli, who migrated from Jharkhand to Delhi.

Father Nobert Xalxo, BEST club director, spearheaded the campaign and contacted various tribal leaders, urging them to send their teams for the tournament. Social media tools were also used to coordinate logistics for the matches, which were held on Sundays. During the course of the tournament, potential youth were identified to be trained through DB Tech and other institutions and be prepared for job placement.

“The aim of the tournament is to identify youth who we could help get jobs. It also helps youth to interact and get to know each other. They work through the week, so Sundays, when the tournament is played, they can relax and socialize,” says Fr. Xalxo.

Fr. Xalxo reports that a census on migrants in India recently estimated that 450 million people migrate to cities in an effort to find employment to make a better living. Migrants are not always welcome in their new cities and struggle to gain a foothold in their new environment. Institutions like BEST look to help provide additional employment skills to migrants to enhance their employability and raise the awareness of migrant populations to encourage businesses to understand the value of this migrant workforce.

ANS – India – Playing for the Migrant Cause