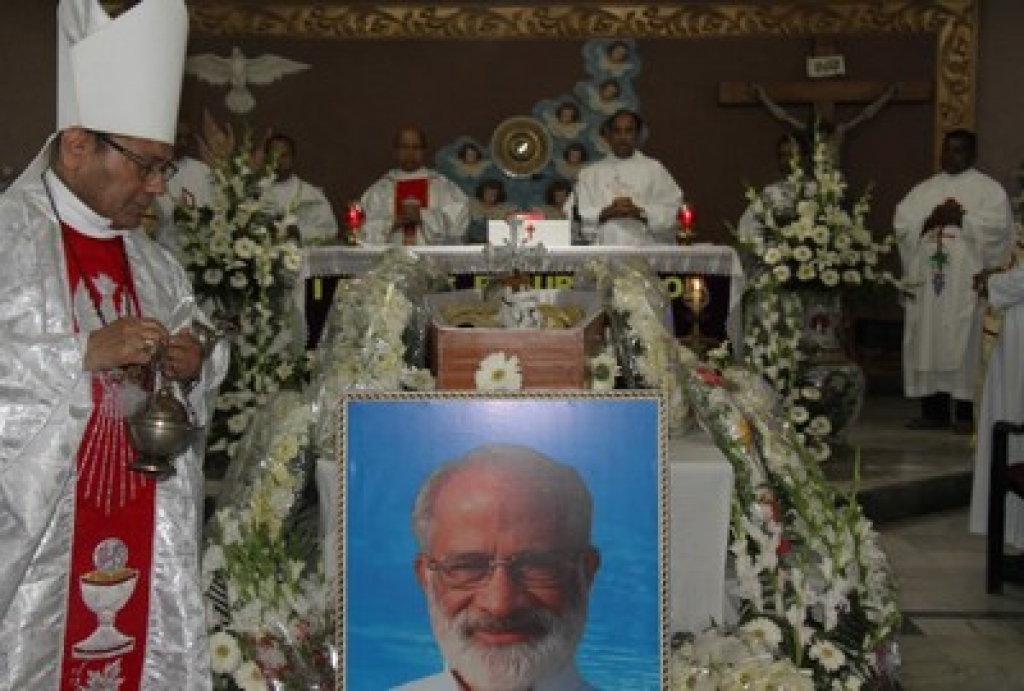 (MissionNewswire) Salesian Father Antony Thaiparambil, who over his life helped more than 80,000 street children access shelter and programs, has passed away. Fr. Thaiparambil, who was from the southern state of Kerala, joined the Salesian congregation in 1950. After he completed a master’s degree in social work, he was assigned to work with youth and children at risk in Kolkata. There he become a surrogate father to many street children.

The 84-year-old priest died in New Delhi of an age-related illness on March 19. About 500 people, including former street children, attended his funeral, which was officiated by Archbishop Anil Couto of Delhi and retired Archbishop Vincent Cocessao of Delhi.

Condolence messages recalled how Fr. Thaiparambil saw the many street children in Kolkata, particularly near Howrah railway station, and decided to create programs to help them. His work started in 1985 when he opened his first night shelter for 14 street children in a slum area near Howrah and began to live with them.

St. Mother Teresa of Kolkata blessed his second shelter, which he named Ashalayam (house of hope), in 1991. She also blessed his third shelter in 1995. About 500 street children now live in 23 Ashalayam shelter homes in the Kolkata and Nadia district of West Bengal. After moving to New Delhi in 1995, Fr. Thaiparambil opened three shelter homes in Delhi, Haryana and Uttar Pradesh.

Bimal Das, now 30 years old and a former street child, flew in from Kolkata to attend the funeral of Fr. Thaiparambil, who rescued him from a street in the eastern Indian city when he was barely 6 years old, according to a UCA News article. He said after the ceremony, “I have not seen God, nor have I seen my parents. But if God is there, I am sure he looks like this man.”

Das said the priest gave him “a life, an identity.” He had no name when he was found. Children around him called him by nicknames they liked. Das added, “I hardly remember when I was rescued because I was too young, barely 6 years old, and was wandering with other children there. My name and age were given by Fr. Thaiparambil. But not just that—my entire life is his gift.”

According to the article, Das now works with the government’s Child Help Line, a project to help street children. He continues to live in the shelter where he grew up in Howrah.

Deepak Kumar Johnny, a street child rescued from a New Delhi railway station by the priest, noted he used to sell popcorn on the railway platform, where he also ate and slept along with other homeless children. He said in the UCA News article, “On a cold winter day, I was sleeping on the platform covering myself with newspaper. I felt someone cover me with a blanket. That was my first interaction with father.”

Johnny, who uses the name the priest gave him, is now 35 and married with two children. He said Fr. Thaiparambil started to visit the station regularly with food and clothes, and slowly the children agreed to go to his ashram. “I am lucky and privileged that I was the first person to enter Ashalayam in 1991 in New Delhi,” he said.

Fr. Thaiparambil educated Johnny and trained him to be a social worker. He now works in the church-run Holy Family Hospital and volunteers to help Ashalayam rescue children from Delhi’s railway and bus stations and streets.

Salesian Father Nirmol Gomes, the provincial of Kolkata, said in his condolence message, “It was the inspiring vision and decisive initiatives of Fr. Thaiparambil that enabled the rescue and rehabilitation of thousands of children from the street and set them on the path to a purpose-driven life, giving them hope and a home.”

Archbishop Thomas Menamparampil, the apostolic administrator of Jowai Diocese, said the priest was “always a source of encouragement to me, never even once exchanging hard words. He had a positive way of looking at things. I never found him upset or angry.”

Salesian programs for street children in India provide outreach to meet children where they are living on the street. Youth are able to visit the programs and engage in social and educational activities as well as receive support and meals. Through educational activities and games, youth receive important lessons in personal hygiene, self-esteem, combating fears and substance abuse. Through these activities, some youth decide they want to formally enter one of the centers to live and study.