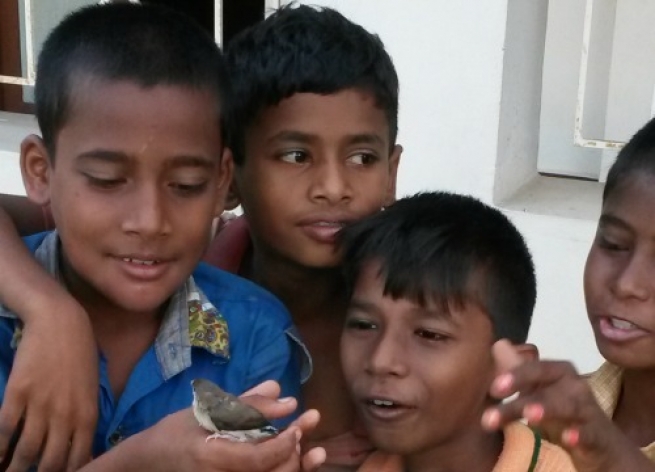 (MissionNewswire) In response to the overwhelming need for HIV/AIDS care in India, Salesian missionaries opened the Don Bosco Care Home in the village of Nilavarapatti, located in the district of Salem in Tamil Nadu, in August 2011. The Salesian-run program provides care and assistance for 62 boys ages 7 to 21 who are living with HIV. Salesian Father Daniel Sebastian, the director of Don Bosco Care Home, has developed the program with a holistic approach.

The first case of HIV/AIDS was reported in India in Tamil Nadu in 1986, and today there are 5.7 million people living with HIV/AIDS in the country, according to UNICEF. Close to 38 percent of those infected with HIV are women, and 55,000 to 60,000 children are born every year to mothers who are HIV positive. UNICEF notes that without treatment, these newborns are at a 30 percent risk of becoming infected during the mother’s pregnancy, labor or through breastfeeding after six months. It is estimated that India has more than 220,000 children infected with HIV/AIDS.

Entrenched gender inequalities, chronic and debilitating poverty and stubborn persistence of HIV/AIDS-related stigma and discrimination significantly contribute to the continuing spread of the infection and hinder those who test positive from seeking treatment. Even young children with HIV/AIDS have been rejected by their families and local communities.

At Don Bosco Care Home, the boys receive counseling, recreation opportunities, medical observation and critical antiretroviral therapy treatments (ART). Some of the boys live at the home and have access to services and educational programs there while others, including those who attend the local polytechnic college, have access to the program’s ART treatments and then return to their own homes.

Reaching people with HIV/AIDS is half the battle in India. There is such a stigma surrounding HIV that most people do not wish to discuss it and are hesitant to seek out information, counseling and testing. Don Bosco Care Home also promotes public awareness campaigns in the community to help educate and sensitize people about HIV/AIDS and issues surrounding the diagnosis.

The program has been particularly effective because youth are able to study and build peer relationships in a safe and supportive environment free from the stigma and rejection they previously encountered. In addition to their school studies, boys take care of the animals and birds at the facility and work the land cultivating fruits and vegetables. They also participate in sports each day. Special programs are also provided including comedy, singing and dancing, which the boys participate in with enthusiasm.

Des Williams, a Bosco Volunteer Action volunteer from Scotland, spent four months volunteering at Don Bosco Care Home. Williams encountered Krishna, 17 years old, who has lived at the home for two years. His was told his mother died of a snake bite when he was just a few months old and his father died of pneumonia when was 6. He was taken in by an aunt but only stayed there until he was 13 when he went to work in a kitchen at a hotel. Krishna was then connected to the Salesian program.

Williams notes that Krishna said that when he first arrived at the program his blood counts were very low. He does not know how he contracted HIV, but since living at Don Bosco Care Home, his health has improved with the proper care and medicine, and he has returned to school. Krishna also likes to draw and paint and finds contentment in his artwork.

“These young boys are having to struggle through no fault of their own. Many of their parents died of HIV and they are left with no one to care for them,” says Williams. “There is a social stigma to HIV in the villages where the boys are born and they suffer not only community rejection but family apathy because they are seen as a financial and emotional burden. These boys know they might die young. Not only do they have the normal problems and anxieties of childhood but these life-threatening medical issues and emotional challenges. Without the care and support of the Don Bosco Care Home these boys may not be here today.”