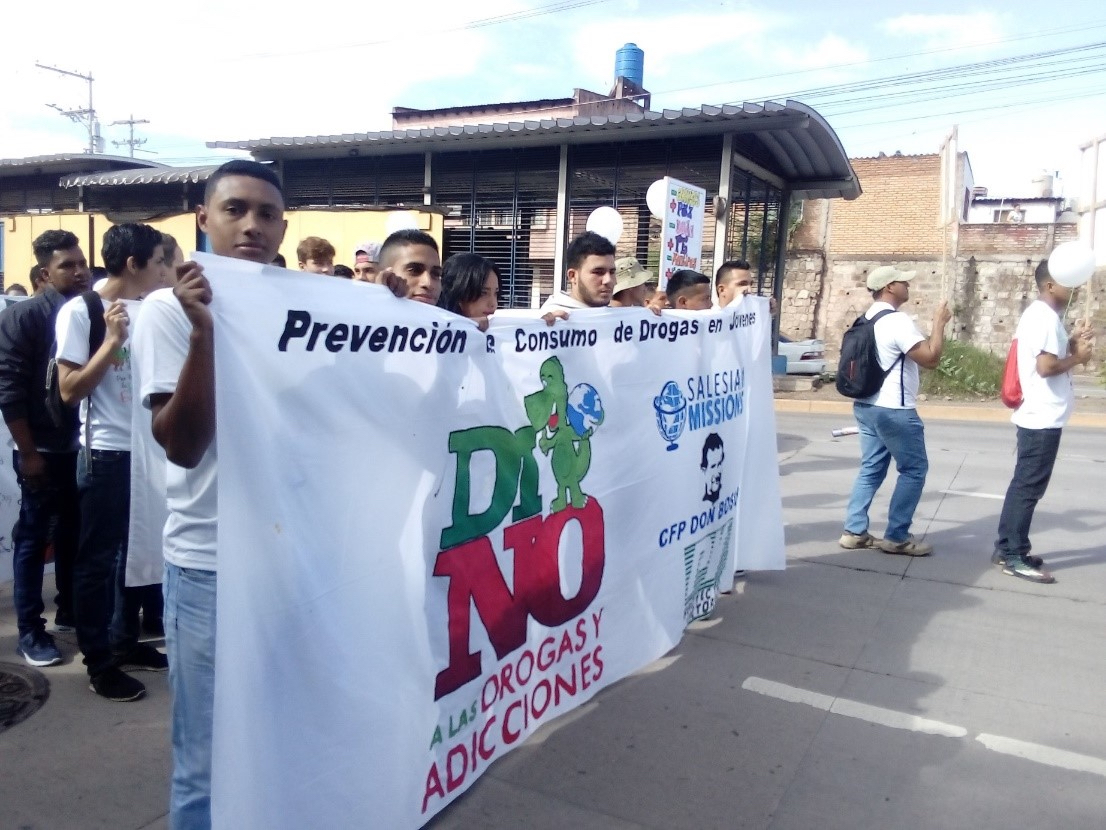 (MissionNewswire) The Don Bosco Vocational Training Center in Tegucigalpa, Honduras has been implementing a “Preventing Drug Consumption by Youngsters in Honduras” project to provide life skills training to 500 youth between the ages of 15 and 30 over a two-year period. The goal is to reduce the involvement of youth who are at high social risk of drug abuse and related criminal activities in the criminal justice system. Salesian Missions, the U.S. development arm of the Salesians of Don Bosco, secured the project funding through a grant from the Department of State Bureau of International Narcotics and Law Enforcement.

As of the fourth quarter of 2018, 331 youth have been trained in the “Preventing Drug Consumption by Youngsters in Honduras” project. This includes 287 continuing from the third quarter as well as 44 participants who recently started the program. Fifteen groups of about 20 students each received an average of 40 hours of life skills training.

“The new life skills training project is providing youth the skills they need most to overcome the challenges in their families and communities,” says Father Mark Hyde, director of Salesian Missions. “Prevention is key but the project helps to meet youth wherever they are and direct them onto a path for success in the future.”

Further activities of this project aim to help strengthen the whole family. A common challenge for participants is having at least one family member grappling with a drug issue or conflict with the law. Many come from families that have completely disintegrated. Often, there are serious economic problems at home that resulted in participants not having their basic needs met and lacking basic services such as food, drinking water and access to transportation.

In August, there was a hosted meeting involving 207 parents and children to discuss the theme, “Let’s make the family the best place to grow.” This meeting provided opportunities for reflection and discussion on ways to better communicate as a family and have parents be a more positive influence on their children. Project staff have recognized that family attitudes can affect the development of youth and drug problems can be prevented by addressing family issues such as domestic violence, negative attitudes and parental drug use.

The project was needed in the region because of its high rate of violence and murder. The majority of participants come from highly vulnerable areas where gangs and drug trafficking prevail. Most are at risk of social exclusion and vulnerable to exploitation and violence.

According to official data of the Online Statistical Police System there were 26 percent fewer homicides in 2017 than in 2016. The murder rate is still alarming with 3,791 people killed in the cities of Tegucigalpa, San Pedro Sula and Choloma, the most violent areas in the country. The victims are often young men between the ages of 16 and 25 years. Most homicides are related to drug trafficking, extortion, gang disputes and assaults.

The second largest country in Central America, Honduras continues to be a highly dangerous place because of the lack of job opportunities, political instability, violence and insecurity and high risk and vulnerability to natural disasters. Honduras is also one of the poorest and most crime-ridden countries in the Western Hemisphere with 60 percent of its population living in poverty, according to the World Bank. Rough geographic terrain in the country has limited the development of transportation, keeping much of the rural population isolated. Poverty and food scarcity are severe in rural areas and one out of every four Hondurans struggle with chronic malnutrition. In addition, one out of every five Hondurans lack access to adequate healthcare.

Salesian missionaries have been working in Honduras for more than 100 years operating schools, youth centers and medical clinics to help support and educate poor youth and their families. Thanks to an ongoing partnership between Salesian Missions and Rise Against Hunger (formerly Stop Hunger Now), an international relief organization that provides food and life‐saving aid to the world’s most vulnerable, thousands of people in need, from infants to seniors, are receiving crucial medical aid and nutritious food through Salesian projects in Honduras.