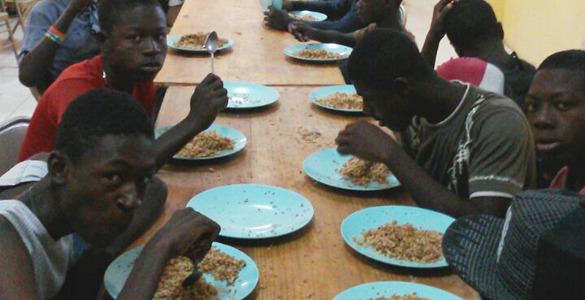 (MissionNewswire) Salesian students at six Salesian centers in Haiti are receiving access to better nutrition this year thanks to a grant from the U.S. Agency for International Development (USAID). Salesian Missions, the U.S. development arm of the Salesians of Don Bosco headquartered in New Rochelle, N.Y., secured the grant for its Hunger for Education USAID International Food Relief Partnership project in Haiti. The project aims to increase the health and learning capacity of students by implementing school feeding programs in Salesian centers within the country.

The project is helping to support the shipment of 20 40-foot shipping containers of meals – eight from Breedlove, a nonprofit organization dedicated to helping eradicate world hunger; eight containers from Rise Against Hunger, an international relief organization that provides food and life-changing aid to the world’s most vulnerable; and four from Feed My Starving Children, a nonprofit Christian organization committed to “feeding God’s children hungry in body and spirit.”

The rice-meals that are being provided cover meals five days a week during the school term for eight months. The donation is shared among Salesian centers in the cities of Port-au-Prince, Fort-Liberté, Cap-Haïtien, Les Cayes, Gressier and Gonaïves. As a result, 12,733 Salesian students are receiving access to a hot meal each day at school. The feeding programs also covers two months of summer programming at Les Cayes, Gressier, Fort-Liberté, Cap-Haïtien, Gonaives, Thorland, Petionville, Drouillard, and the post-novitiate.

The food aid shipments being received at Salesian centers and feeding programs are continuing to make an impact for students. The project has also helped to ensure each of the six centers has kitchens equipped to cook the rice-meals and trained 15 school cooks to prepare the nutritional meals for students. Prior to this project, the Cardinal Keeler Center in Gonaïves had no kitchen. This project allowed the center to develop a new kitchen from the ground up, including cooking supplies.

“The new kitchen and feeding program has been well received by students from all disciplines within the school,” says Father Yves Jorcelim Pierre, director of the center. “This new kitchen has also provided access for teachers, support staff, cooks and managers to eat there as well. The feeding program and donation of food aid has been a great blessing to our center. Children are now assured a hot meal each day. Prior many were coming to school on an empty stomach and knowing they had no food to go home to in the evening. Children are much more focused on their studies now.” 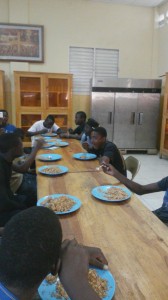 The Hunger for Education project also serves as an incentive for children living on the street to seek out one of the Salesian programs for street children, where they receive hot meals in exchange for education and job-skills training. Salesian schools provide opportunities for remedial education and tutoring through their youth centers and programs for street children. However, no matter how many hours a child may spend sitting in a classroom, it is hard to focus and retain any information if the child is hungry. Additionally, some parents in Haiti will only allow their children to attend school if a meal is provided because otherwise the child is needed at home to work and provide for the family.

In Cap-Haïtien, the Primary School of the Vincent Foundation and the Lakay Program for Street Children are both beneficiaries of this project. Students attending the agricultural school at the Vincent Foundation were about to give up classes because of how challenging it is to focus on studies on an empty stomach. Because of this project, students were able to take advantage of the school’s feeding program. For many students, the Hunger for Education project made the difference between staying in school and dropping out.

Haiti is the poorest country in the Americas ranking 163 out of 188 countries on the United Nations Human Development Index. The country also faces the highest levels of severe food insecurity in the world, according to the World Food Programme. More than half of the country’s population was chronically undernourished during 2012-2014, representing a total of 5.3 million Haitians. Nearly 100,000 Haitian children under the age of 5 suffer from acute malnutrition, causing irreversible stunted growth for close to 30 percent of all children in the country. Haiti’s economy has also been repeatedly affected by political crises and natural disasters in the last two decades exacerbating an already challenging situation. Seven years after the 2010 earthquake, Haiti’s population of 11 million continues to face humanitarian and development challenges.