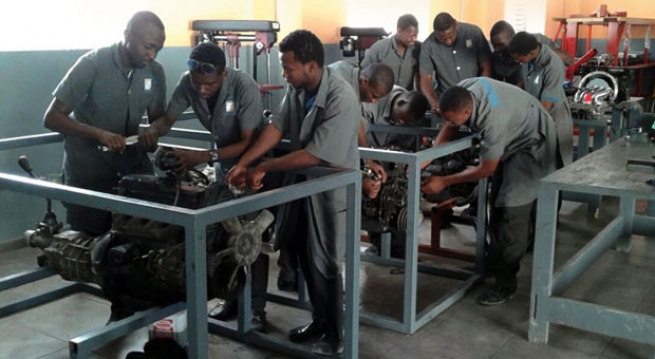 (MissionNewswire) Salesian missionaries are continuing to rebuild after Hurricane Matthew, a Category 4 hurricane, pummeled Haiti on Oct. 4, 2016, affecting 2.1 million people including close to 894,000 children. The hurricane caused nearly 1,000 deaths and has left nearly 141,000 people still displaced, most of whom are living in temporary shelters. The Salesian-run Rinaldi Foundation of Haiti, which headed up the Salesian response to the hurricane, is also leading the rebuilding efforts.

Recently, Salesian Missions Madrid, in collaboration with the Salesian Spanish organization Youth and Development, launched a training program with the Rinaldi Foundation in Les Cayes for 200 youth. The training takes place at the Diocesan Center for Arts and Crafts in one of the areas devastated by last year’s hurricane. The training program lasts for six months and includes training in five disciplines including metallurgy, carpentry, construction, hairdressing and hotel management courses.

“The courses are not just designed to be technical in nature, but they also provide a series of socio-cultural support activities to help participants grow and flourish in a context of human development,” said Father Jean Paul Mésidor, the Salesian provincial in Haiti during the inauguration of the courses. “The professional training aims to prepare students for the workforce as well as promote local entrepreneurship, helping young people to create their own small businesses.”

Haiti’s educational system is continuing to rebuild after the 2010 earthquake destroyed 90 percent of schools and 60 percent of hospitals, killed thousands of people and left more than 350,000 injured. After Hurricane Matthew, the Rinaldi Foundation, in collaboration with Salesian technical and vocational training centers, launched a number of rehabilitation projects across the country. One project included the rehabilitation of 158 homes in the Bergeau district of Les Cayes and Camp-Perrin in the south department of Haiti to ensure that 790 people have a home again. Missionaries also started distributing seeds and agricultural tools to those who lost their crops and with them their livelihood. About 500 farmers benefited from this project, which also allowed the resumption of economic activities in selected areas.

Despite ongoing reconstruction and infrastructure improvements, Haiti remains the poorest country in the Americas and one of the poorest in the world. According to the World Bank, over half of the country’s population of 10 million lives on less than $1 per day and approximately 80 percent live on less than $2 per day. The majority of Haitians lack adequate access to education, health care and nutritious food.

Salesian missionaries arrived in Haiti in 1935 upon request from the Haitian government to run a professional school. There are more than 200 Salesian-run schools in Haiti. Salesian programs are located throughout Haiti, including Port-au-Prince, Fort-Liberté, Cap-Haïtien, Les Cayes and Gressier. Salesian missionaries operate 10 main centers across the country, each of which has a number of primary and secondary schools, vocational training centers and other programs for street children and youth in need.