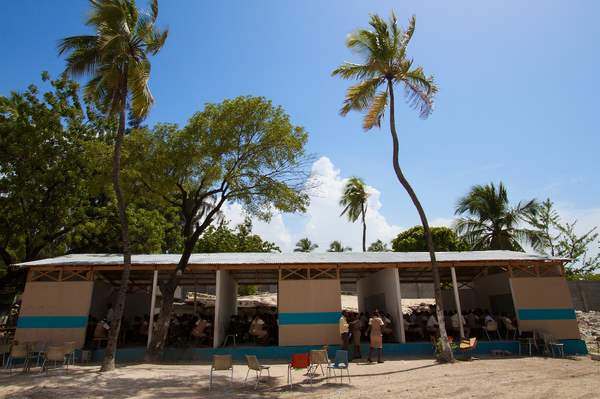 (MissionNewswire) Despite ongoing reconstruction and infrastructure improvements that are helping to rebuild Haiti after the January 2010 earthquake that devastated the country, Haiti remains the poorest country in the Americas and one of the poorest in the world. According to the World Bank, over half of the country’s population of 10 million lives on less than $1 per day and approximately 80 percent live on less than $2 per day. The majority of Haitians lack adequate access to education, healthcare and nutritious food.

In 2012, more than 3 million Haitian children returned to school with 200,000 of them educated in Salesian-run institutions. The country’s educational system is continuing to rebuild after the earthquake destroyed 90 percent of schools and 60 percent of hospitals, killed thousands of people and left more than 350,000 injured.

For Salesians in the country, schools in Haiti fulfill an important socio-economic mission by providing poor youth a foundation for lifelong learning through education and training in skills and trades to help them escape poverty and establish a sustainable livelihood.

Recently, Salesian missionaries secured financial support from Mercedes-Benz for their “Food for Haiti” project which is designed to meet the nutritional needs of children affected by the earthquake. Currently, the project is improving the nutrition of 135 children aged 3 to 9 who live in La Saline and Cite Soleil, the two largest slums in Haiti’s capital city, Port-au-Prince.

The “Food for Haiti” recipients attend the Little Schools of Father Bohnen —“Oeuvre des Petites Ecoles de Père Bohnen” — or OPEPB in French. They are a network of 50 small Salesian-run schools that were founded in 1954 to educate Haiti’s most vulnerable children. Most of the student’s families were already poor and lost everything in the earthquake, including the ability to feed their children and send them to school. With parents out of work with little means to provide adequate nutrition, or even a daily meal in some cases, many children suffer from acute malnutrition. As a result, additional health complications such as stunted growth, poor immune systems, tuberculosis, skin diseases, bronchitis and other ailments are prevalent among children.

The project focuses on providing a daily breakfast and hot lunch for school students with the goal of helping them flourish in school. For most, school is the only place a daily meal is offered. The food serves as an incentive for families to send their children to school, since parents often do not understand the importance of education for their children’s future.

Proper nutrition increases the cognitive abilities of children and increase their chances of staying longer in the education system. It also allows children to socialize and develop relationships with their peers, a process important for their rehabilitation and normalization after the psychological trauma of an earthquake.

“Access to nutritious meals allows youth to be better prepared to take part in school activities and focus on their education,” says Father Mark Hyde, executive director of Salesian Missions, the U.S. development arm of the Salesians of Don Bosco. “Prepared students are more likely to stay engaged with their peers and school activities helping them to remain in school and gain an education.”