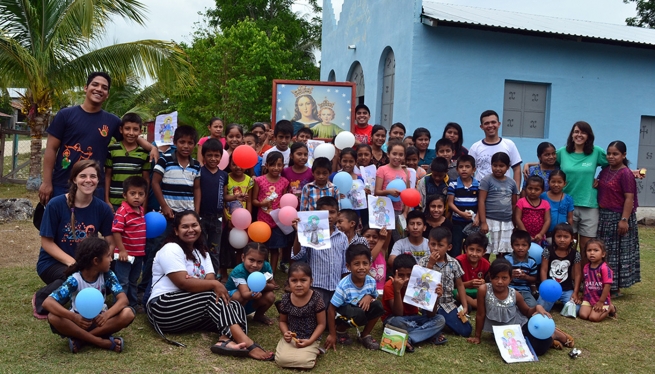 (MissionNewswire) Salesian missionaries provide a range of educational and social programs for poor youth and their families in San Benito Petén, Guatemala. Recently, two Argentine doctors, Florencia and Maite, spent several months as volunteers working with the Salesian parish in the community. Their work began in October 2016 and included providing care for those who came to the local health clinic.

Located in the Candelaria district, people from both the city and neighboring villages arrive at the health clinic every day. The facility works primarily with individuals from limited economic means and offers medical advice, basic healthcare and low-cost medicines. Once a week, the two doctors would go to the area’s remote communities to take care of those who could not reach the health clinic, as well as a home hosting many patients with more severe medical conditions.

“We had a chance to connect with the local community and learn more about what Salesian missionaries are doing in the local area,” said Florencia and Maite in a joint statement. “We have been very motivated by the work of Salesian missionaries and were happy that after we graduated that we could fulfill our mission to assist these communities in collaboration with them.”

The doctors also participated in the Salesian PAAS program, which provides first aid training to Salesian programs in Argentina. The two plan to bring this same initiative to San Benito and Guatemala City to share and highlight the importance of taking care of one’s life and health.

“The work we do in the Guatemala and in programs around the globe goes beyond education,” says Father Mark Hyde, executive director of Salesian Missions, the U.S. development arm of the Salesians of Don Bosco. “We aim to serve the whole person by making sure that basic needs like health and nutrition are met in addition to other social service needs. “

Additional Salesian-run programs in the El Petén region continue efforts to prevent HIV/AIDS and provide treatment for those who have the disease. The area has the third worst incidence rate for contraction of HIV in Guatemala. Despite the fact that the project that financed this work has ended, Salesian missionaries continue to do prevention work and offer medical care and other social services for those infected with the virus. Missionaries continue to seek additional funding and are working with the Office for the Prevention of AIDS of the Episcopal Conference of Guatemala, which is operating many of the existing prevention programs for women in the country.

Rural poverty hasn’t changed much in Guatemala during the last 20 years, according to the World Bank. Close to 75 percent of the population is estimated to live below the poverty line and almost 58 percent lives below the extreme poverty line, which the World Bank defines as struggling to afford even a basic basket of food. For the country’s indigenous population, the poverty rates jump even higher with almost 90 percent facing crippling poverty and few resources.

ANS – Guatemala – Two Argentines in Petén: “We found God in the people with whom we shared this path”