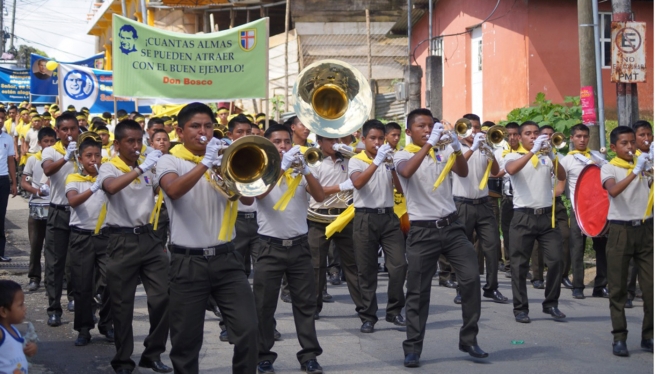 (MissionNewswire) The Don Bosco Center, located in Tzacanihá, near San Pedro Carcha, has been welcoming the children and young people of Raxruhá and the nearby city of Chamelco for 35 years. The organization recently celebrated its anniversary. Father Antonio De Groot, founder of the Don Bosco Center, organized this 35th anniversary celebration with the support of his nascent indigenous religious congregation, the Missionaries of Christ the Good Shepherd and a large group of collaborators.

Nearly 1,000 people participated in the three-day celebration. Youth who currently stay at the Don Bosco Center, as well as those who were once educated and lived there, shared their experiences and happiness with music, theater, sports, fashion shows and walks. A Catholic mass closed the celebration.

Back when the organization was founded, Fr. De Groot lived and worked in Raxruhá, a remote area at the edge of the forest that was almost inaccessible and with no basic services. One day, a young man asked him if he could visit his home to learn how to read and write. Shortly thereafter, a second young man joined him, then a third, and soon a small group formed. As the group enlarged, elementary structures also began to emerge. Thirty-five years later, the Don Bosco Center features beautiful and functional buildings and green areas, all characterized by cleanliness and order.

In the geographical area where the Don Bosco Center has been operating, the center has represented a true educational revolution. It has demonstrated the young students’ intelligence and attentiveness, their great desire to learn and their boundless energy. Many students who have succeed in graduating from the Don Bosco Center have gone on to higher learning at the university level and are now working as professionals.

“All youth deserve to be valued members of their community,” says Father Mark Hyde, executive director of Salesian Missions, the U.S. development arm of the Salesians of Don Bosco. “Students supported by the Don Bosco Center have a real opportunity to gain an education, connect with their peers, and gain the work and social skills needed for long-term employment.”

Rural poverty hasn’t changed much in Guatemala during the last 20 years, according to the World Bank. Close to 75 percent of the population is estimated to live below the poverty line and almost 58 percent lives below the extreme poverty line, which the World Bank defines as struggling to afford even a basic basket of food. For the country’s indigenous population the poverty rates jump even higher with almost 90 percent facing crippling poverty and few resources.

Salesian missionaries working and living in the country have been providing for the basic needs of Guatemala’s youth while helping to break the cycle of poverty in their lives. They work extensively with poor youth and their families at youth centers, orphanages, parishes and primary and secondary schools, as well as technical schools, vocational training workshops and two universities. Additional social and educational programs help provide for youth living on the streets and those living in poor indigenous communities.