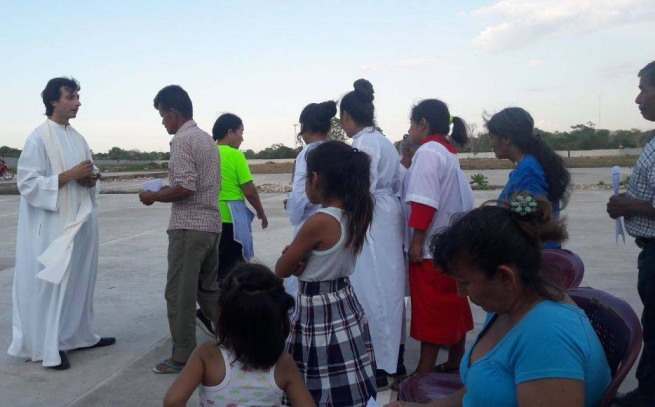 (MissionNewswire) Early in 2018, Salesian missionaries received a shipment of food, medicines and other items from Canada for their mission in San Benito Petén, Guatemala. Among the items received were 10 cases of protective masks for nurses which was far beyond what the mission though they could use. The masks proved extremely useful after the Fuego volcanic eruption that happened on Sunday, June 3.

The eruption caused close to 100 deaths and displaced more than 3,000, according to Guatemala’s National Forensic Sciences Institute. After the eruption, towns were engulfed in thick, heavy ash. Residents were caught off guard in the remote mountain villages and had little to no time to prepare or flee to safety.

Salesian missionaries living and working in the country report that ash had fallen on at least five departments, including Escuintla, Chimaltenango, Quiché, Sacatepéquez and Guatemala. The alarm system was immediately activated and the rescue corps intervened to evacuate the population affected by the natural disaster and to save the injured. However, lava from the volcano joined a stream of mud generated by heavy rains falling in those areas. This caused the lava to flow faster in the streets, preventing local people from escaping.

Salesian missionaries immediately began providing what aid they could with seven centers engaged in helping with relief efforts. Clothes, non-perishable foods and water was delivered to the charitable organization, Caritas of Guatemala, which was responsible for distributing the items to the needy.

At the time, Father Giampiero De Nardi, an Italian Salesian missionary in San Benito Petén, found the boxes from the earlier shipment of masks and medicines, believing they would be useful.

“After a few months, the masks turned out to be among the most useful asset when our parish took part in the collection of aid for the victims of the Fuego volcano,” says Fr. De Nardi. “Together with the bandages, the masks for rescuers and nurses working in the affected area proved to be a blessing with the community of San Benito acting as intermediary.”

The Salesian parish of San Benito Petén was also engaged in broader relief efforts. It was immediately able to collect food, medicines and other goods needed by those helping with the rescue effort and aiding the victims. Later, it was able to help raise funds to be sent to other parishes that were affected.

“The response was very generous,” adds Fr. De Nardi. “We live far from the areas hit by the eruption of the volcano but we share the every day difficulties of the areas affected by this disaster. A poor country is showing in all emergency situations we are able to still help by the generosity within out communities.”

ANS – Guatemala – Circular Solidarity: when the poor help the poor