(MissionNewswire) Thanks to an ongoing partnership between Salesian Missions and Rise Against Hunger, an international relief organization that provides food and life-changing aid to the world’s most vulnerable, seven donations of soap were made to Salesian programs in places like Haiti, Swaziland and Guatemala in 2017. The soap was included in regular shipments of rice-meal donations that are made to Salesian programs in countries around the globe by Rise Against Hunger.

According to the World Health Organization, millions of young lives could be saved with access to bar soap and hygiene education. Pneumonia and diarrheal disease are two of the leading causes of death among children under 5 years old. Most are from populations in developing countries who live in extreme poverty. Having access to clean water and soap is one of the best preventive measures.

Talita Kumi Foundation for the Development and Education of Indigenous Women in Guatemala was one of the soap donation recipients. Talita Kumi has four boarding school through which more than 600 indigenous women receive education free of charge. In addition to the boarding students, Talita Kumi works with youth who attend programs each day. In 2017, Talita Kumi has served 1,300 students who benefited from the bars of soap for personal hygiene and education in health, hygiene and nutrition.

Providing education directly to boarding students allows Salesian missionaries efficient follow up to assess the changes in students’ attitudes, behaviors, and practices. The students have learned important lessons in hygiene related to cooking practices, agricultural practices and daily activities of the boarding school. They learn the importance of adequate hygienic practices for them, their families and their communities.

“My parents supported me to come study at Talita Kumi because here everything is free for us and that helps us a lot,” says Deysi Paola Pacay Pop, a 9th grader. “Here they give me white soap that smells very good. In addition, they teach us that one should be clean to have good health. They teach us that we should wash our hands if we are going to eat or prepare food, in order to not contaminate the food or fill us with bacteria. Then I know that if I clean my hands, I won’t be sick a lot. When I return to my home, I am going to teach this to my little siblings.” 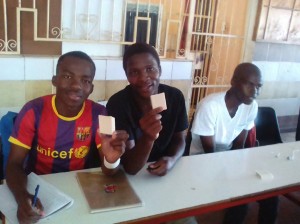 Another Salesian organization, the Manzini Youth Care in Swaziland, also received donated meals. The organization provides services to marginalized youth including free primary school for children who have dropped out of school due to poverty, two vocational training centers for older youth, residential care for former street children and a drop-in school for street children when they first come in off the streets. Manzini Youth Care also serves the communities surrounding the city of Manzini to help residents improve their living standards, sanitation and food security

Salesian missionaries engaged in providing hygiene education along with passing out the soap report that the soap is being used in the homes of local residents. There has been significant improvement in the residents’ health after using the soap regularly. Previously, the children would have skin irritations and problems and there was even an outbreak of cholera in 2016. Since the soap donation, the children are healthy and no one single case of cholera was reported in the area in 2017.

“The partnership with Rise Against Hunger allows Salesian Missions to expand its services for youth in need,” says Father Mark Hyde. executive director of Salesian Missions, the U.S. development arm of the Salesians of Don Bosco. “Operating feeding programs and providing other life-changing supplies for youth is integral to the success of our students and their ability to gain an education.”