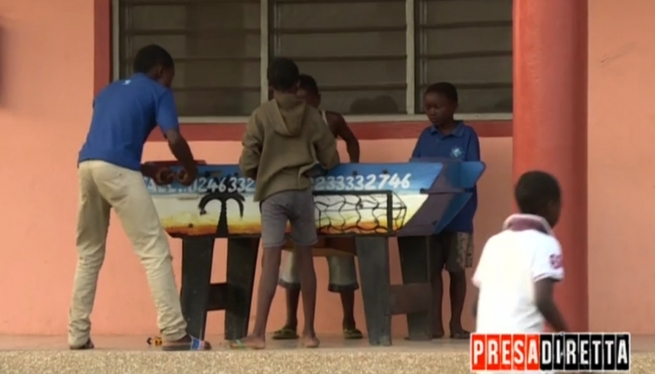 The center offers shelter, counseling and education to help children make the transition out of trafficking and into long-term recovery. Often arriving at the center injured, with low self-esteem and little hope for the future, many become comfortable and settled into their new surroundings within a few weeks.

“The phenomenon of child slavery is unfortunately widespread in that African region,” says Fr. Roggia. “It’s been happening for years. Twenty years ago, when I traveled by land between Nigeria and Ghana, passing through Benin and Togo, at the borders you could see the posters of organizations that warned against the trafficking of children, sold for years and used in cocoa plantations as labor at zero cost from unscrupulous bosses.”

Child trafficking later spread to the fishing and herding sectors and then opened up to foreign criminal circuits. To help address the needs of youth who are victims of trafficking, Salesian missionaries launched the Child Protection Center. The center now stands on land donated by Inna Marian Patt, the winner of Miss Ghana 2004. Patt wanted a structure to be built that was dedicated to the most disadvantaged young people and after connecting with Salesian missionaries, that dream came true.

After police rescue children from trafficking, it is essential they are connected to services that offer both psychological and social recovery as soon as possible. At the Child Protection Center, children access these services, are taught to read and write and receive a proper school education. When they are ready, they are able to access the technical education and support they need to find and retain work.

“You see the miracles,” adds Fr. Roggia. “Children who had lost their ability to talk because of the trauma they were subjected to immediately begin once again to communicate. Those who were sentenced to years of total isolation resume socializing.”