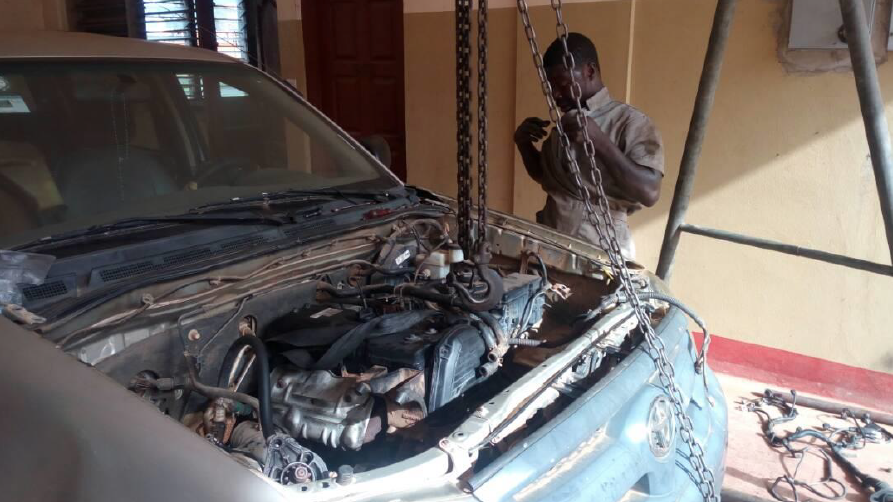 (MissionNewswire) Salesian missionaries at the St. Francis de Sales Community in Ashaiman, Ghana recently completed a project to restore a Toyota Hilux truck in order to provide greater logistic capabilities at the Salesian center. Funding they received provided the ability to purchase a functioning second-hand engine and other parts to put the truck back on the road. Having an accessible vehicle at the center will benefit the more than 700 students at the school as well as staff and management.

The Toyota Hilux truck was initially purchased in 2006 and has been used for various activities within the center and in the community for both social and pastoral activities. Considering the resilience of the car after nearly 10 years, an assessment was carried out to evaluate the best way to make it useful as purchasing a new vehicle was not a financial possibility. The assessment showed that the car was in generally in good condition. While it was capable of serving for two or three more years, the engine had broken down, body work was needed and it had a few accessories that needed replacement.

After trying two different second-hand engines, an engine in good condition was identified, purchased and installed. All the other accessories requiring replacement were also purchased and fixed as needed. The truck is now back on the road and serving the Salesian community. It is significantly helping with logistics of the center and in transporting youth from the different programs, including from the hostel where they live to the technical school. It has even been utilized to assist in connecting with street children and bringing them to the youth center for activities.

“This sounds like a miracle. We almost gave up on the truck, and we continued to wallow in great logistical constraint for our work with the young people. Now this is a real relief for mobility and we cannot express the joy of the community. We are very grateful to the donors, on behalf of these young ones we serve,” says Father Peter Kpen-Ana Savio, who oversees the Salesian center.

While Ghana’s economy continues to improve, nearly 45 percent of the population lives on less than $1 a day, according to UNICEF. Ghana ranks 139 out of 188 countries on the United Nations Development Program’s 2015 Human Development Index, and rural poverty remains widespread in the dry savannah region that covers roughly two thirds of Ghana’s northern territory. Small-scale farms suffer from a lack of infrastructure and equipment, both of which are needed to shift from subsistence farming to more modern commercial farming which would yield greater incomes and a chance to escape poverty.

Salesian missionaries in Ghana focus on education and skills training to help youth gain the skills needed to find and retain stable employment. Salesians in the country are working to meet the growing demand for skills training. A Salesian training center was opened in 1992 and has been developing new programs to meet the needs of local youth ever since. Early on, the center expanded to include training in a wide range of skills from carpentry and metal work to graphic arts. Salesian missionaries have also developed a credit program to aid training center alumni in financing new businesses.

In addition to the training center and credit program, Salesian missionaries run agricultural programs in the country. Through these programs, students learn about vegetable gardening, cooking, annual crops and the business of farming.