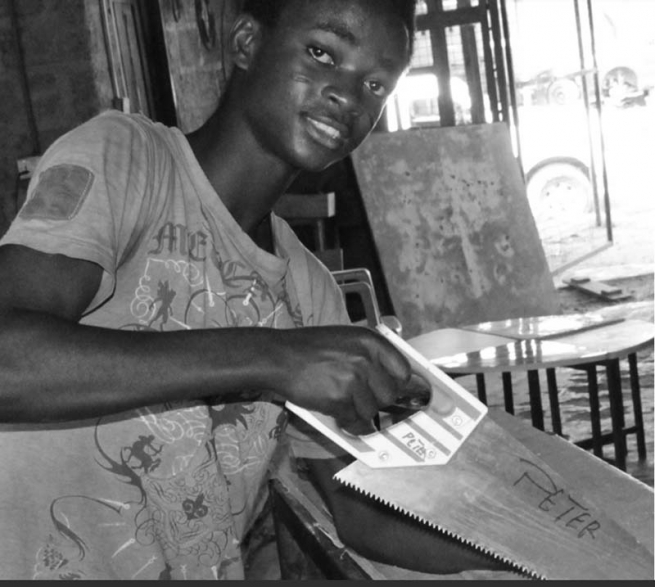 (MissionNewswire) Salesian missionaries, led by Salesian Father Ubaldino Andrade, operate the Don Bosco Boys Home for street children in Sunyani, Ghana. The program provides shelter, education and social development services for poor youth who have been abandoned, have runaway or are at risk of violence and exploitation.

Like other youth his age, Edo, age 18, has a story that is marked by family disintegration, reliance on grandparents, child exploitation and migration. Edo’s parents died when he was young, and he was sent with his brothers to the Lake Volta region to live with his grandmother. She is elderly and living in poverty and could not care for him. She accepted the offer of a fisherman to have him start working. Edo stopped going to school and was put to work. Edo was later entrusted to the Salesian program by another nonprofit that works with exploited children.

After his arrival at Don Bosco Boys Home, it was clear that Edo did not like school, but he was willing and happy to learn a trade. For three years, Edo remained in the school program, living together with other youth. Only after he had learned to read and write did Salesian missionaries give him the opportunity to enroll and attend the carpentry and blacksmith courses.

Edo’s goal is to return to his village and start a business there. He visits his grandmother and his brothers three times a year to avoid losing contact with his family. Today, Edo is working hard to ensure his dreams become a reality. His tutor is happy with him, gives him breakfast every day and weekly pay for the work he does. Soon he will be able to be his own boss and help his local village. Edo wants to be able to help other young people who did not have the same opportunities.

“All youth deserve a second chance in life and that’s what the Don Bosco Boys Home provides through shelter, education and a supportive environment,” says Father Mark Hyde, executive director of Salesian Missions, the U.S. development arm of the Salesians of Don Bosco. “Thanks to the Don Bosco Boys Home, Edo now has a new life and new prospects for the future.”

Salesian programs in Ghana and around the globe provide programs and services for youth like Edo who have nowhere else to turn. The education at Salesian schools and safe shelter and care by adults in Salesian homes is sometimes the only access youth have to a normal childhood and a second chance for hope for the future.

ANS – Ghana – Edo: story of a teenager who was able to find his way