Home / ANS  / GHANA: A young girl finds hope for the future after restarting her education at Salesian Child Protection Center

GHANA: A young girl finds hope for the future after restarting her education at Salesian Child Protection Center 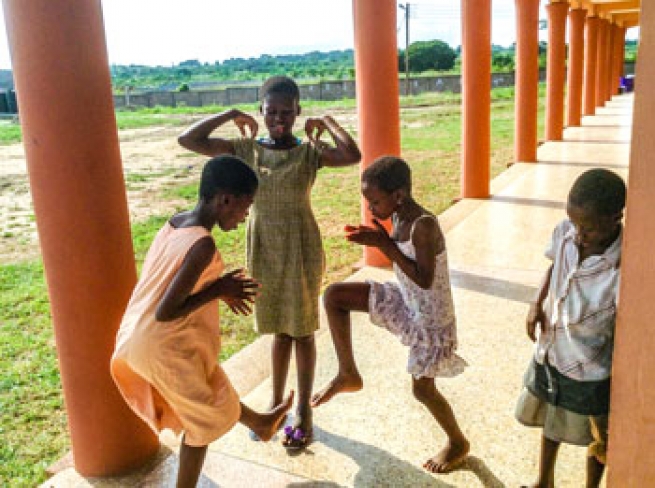 (MissionNewswire) When 14-year-old Mawufemor arrived at the Salesian Child Protection Center in Ashaiman, a large town in the Greater Accra Region of South Ghana, she was malnourished. After having left school several years before, she had experienced many terrible things. At the center, she found hope for the future.

“The challenges of my life began after the separation between my parents. My mother left me in the care of my father who forced me to go and stay with him in a village near Lake Volta where he would fish,” says Mawufemor. “I would wake up at dawn and go to bed late at night. I was doing housework, and I was still selling fish.”

Mawufemor had to abandon school to work alongside a fishmonger to be trained to sell fish. After the death of her father, she began living in a fisherman’s house. She continues: “For several years I did not go to school. I wore worn clothes and often went to sleep without dinner. When my ‘foster father’ went fishing, he would leave me alone for days on end at home without food. He scolded and insulted me constantly. He molested me. They were frightening moments. I was terrified, and I never talked to anyone about the abuse. One day I made the mistake of seeking help from a neighbor, but this simple gesture made my adoptive father furious. He severely punished me.”

Fortunately, someone told her mother and she took Mawufemor back to live with her despite her precarious economic situation. Mawufemor was sure that she’d have to go to work as a maid to help make ends meet. Then, her mother found the Salesian center and came home to tell Mawufemor about this group of people who took care of children who had been working in slavery on Lake Volta. Mawufemor had never heard of the Salesian center but reluctantly went to visit.

“I immediately felt loved and welcomed,” says Mawufemor. “The meetings I participated in helped me regain my self-esteem. Today, I can safely say that I want to learn as much as possible, and I am more than willing to help the younger children in the center. I’m happy and I believe in the future.”

Children come to the Salesian Child Protection Center through referrals from other nonprofits and from the police, usually following a complaint. The center offers shelter, counseling and education to help children make the transition out of trafficking and into long-term recovery. Often arriving at the center injured, with low self-esteem and little hope for the future, many become comfortable and settled into their new surroundings within a few weeks.

In addition to the center, Salesian missionaries operate a technical school in the region that offers courses in five professional fields including electrical, IT, electronic, solar energy and accounting. More than 700 students attend the school’s three-year courses with about half of the graduates enrolling in university afterwards. Established 20 years ago, the school is now considered the best technical school in the metropolitan area of Accra.

ANS – Ghana – “I immediately felt loved and welcomed”. The story of Mawufemor