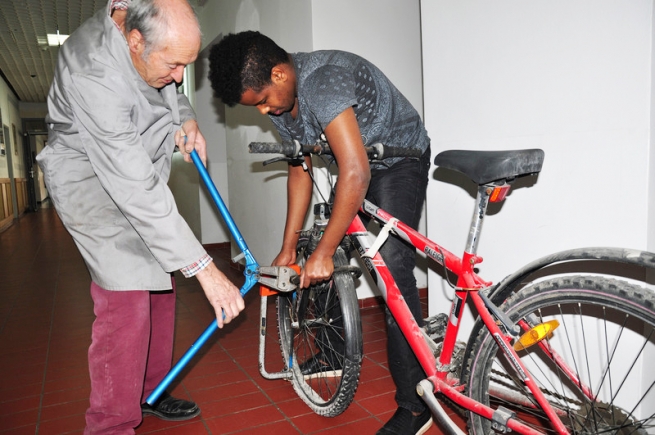 (MissionNewswire) Salesian missionaries have partnered with the Paribas Foundation in order to assist young refugees in centers in Munich and Nuremberg. The Paribas Foundation in Germany has donated 30,000 Euros to support Salesian missionaries work with refugee children. The funding is intended, among other things, to finance a coordination center for part-time volunteers and to support refugees during the transition period between finishing school and beginning vocational training.

“It is very important for us to promote contact and exchange between young refugees and young people in Germany. It is important that they can learn from each other,” said Stefan Bauer, of the Salesian program in Munich in Bavaria, and Stefan Müller, of the Salesian Youth Center in Nuremberg, in a joint statement. “The first thing that is required is that young people have a means of transportation and it was decided to provide them with bicycles and economic support for the use of public transport.”

Throughout Germany, Salesian missionaries operate several projects and facilities for young refugees who have sought asylum and arrived in the country without their family. The goal is to help these youth with their daily lives and assist with finding them a home and employment, and integrating them into their new communities. Across Germany, there are nearly 500 young refugees accommodated in Salesian institutions, with 100 of them in Munich and Nuremberg. Most of the refugees accessing Salesian programs are youth between 16 and 18 years old who come from African countries or from Afghanistan, Syria and Iraq.

Salesian missionaries and their network of programs across Europe are part of a network of organizations headquartered in Portugal that helps assist European countries with the refugee crisis. Salesian programs provide humanitarian and educational assistance to refugees by helping them become fully-integrated and independent within their new countries and homes.

Europe has been experiencing a refugee crisis of historic proportions, according to UNHCR, the United Nations Refugee Agency. In 2015, more than 1 million refugees and migrants crossed the Mediterranean Sea to come to Europe. At the end of 2015, 60 million people worldwide, the highest level on record, were forcibly displaced as a result of persecution, conflict and human rights violations, and of those documented, 19.5 million were refugees.

In 2014, European Union countries hosted a relatively small share of refugees. At the end of 2014, the world’s top refugee host was Turkey followed by Pakistan, Lebanon, Iran, Ethiopia and Jordan. Lebanon hosted by far the largest number of refugees by population. By the first six months of 2015, 137,000 refugees and migrants arrived in Europe by sea under profoundly difficult and unsafe conditions as compared to the 75,000 that arrived during the same time period the previous year. The numbers have continued to rise throughout 2016 because of the ongoing conflicts in Syria and Iraq as well as conflict and instability in countries such as Afghanistan, Eritrea and elsewhere.

“Salesian missionaries are working across Europe helping to provide needed services for the new wave of refugees arriving in these countries,” says Father Mark Hyde, executive director of Salesian Missions, the U.S. development arm of the Salesians of Don Bosco. “In countries around the globe, Salesian missionaries are assisting close to 400,000 refugees and internally displaced persons whose lives have been affected by war, persecution, famine and natural disasters such as floods, droughts and earthquakes. Salesian programs provide refugees much needed education and technical skills training, workforce development, healthcare and nutrition.”