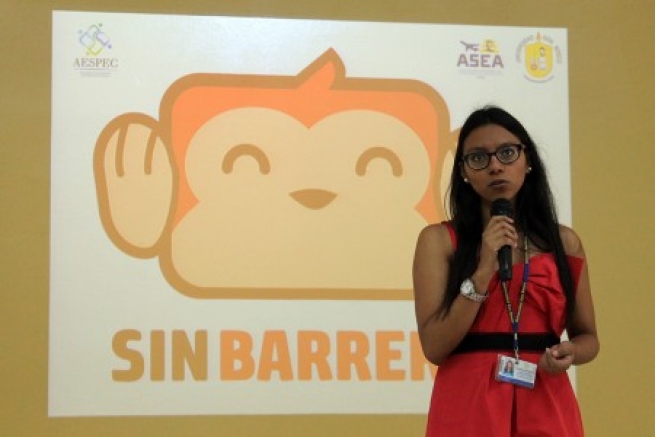 (MissionNewswire) The Association of Salesian Students for Thought and Civic Education (AESPEC) and the Salesian Association of Students of Aeronautics (ASEA) at the University of Don Bosco in El Salvador recently launched Without Barriers initiative. Without Barriers promotes the social integration of hearing impaired students within the university. The first step was the development of a course in American Sign Language (ASL).  This course has been made available to the entire university population including students, teachers and staff. To date, nearly 200 people have already enrolled.

“The new Without Barriers initiative aims to bring ASL courses together with conferences and debates to bring a level of sensitivity and awareness of the problems those who are hearing impaired not only face in the field of education, but also in the labor market and in social reality,” says Mariely Rodriguez, president of AESPEC.

According to the representatives from both Salesian associations, there are hearing impaired students attending Don Bosco University who sometimes cannot count on someone to help them communicate with other people, and so it is difficult for them to engage in certain activities inside the school’s campus. The goal of the initiative is to work towards greater inclusion of all students to be able to participate fully and engage campus life.

Inspired by the motto, “Speak with your hands and make the difference” Salesian students engaged in the project created a mascot, a monkey that covers its ears with its hands, named Phill, who represents the project’s message. Secondo Juan Villalobos, a mechanical engineering student at the university with hearing disabilities and one of the facilitators of the course, noted that Without Barriers is an excellent way to integrate deaf people in society and enable others to communicate with them.

“Children living in poverty with a disability are even less likely to attend school when compared to their peers,” says Father Mark Hyde, executive director of Salesian Missions, the U.S. development arm of the Salesians of Don Bosco. “Youth with disabilities have the same ability to achieve as their peers, if given the opportunity. This project at the University of Don Bosco is working to make sure that all students have access to the opportunity to lead fulfilling lives and contribute to the social, cultural and economic vitality of their communities.”

Close to 35 percent of El Salvador’s population lives in poverty, according to the World Bank. Youth in El Salvador are confronted not only with poverty, but with instability, high levels of violence and inadequate access to educational opportunities. Despite ranking high for economic indicators, the need for practical education in the country is more important than ever with 12 percent of youth ages 15-24 unemployed and 41 percent underemployed.

El Salvador is one of the most violent countries in Central America, along with Honduras and Guatemala. The murder rate in El Salvador rose more than 44 percent in the beginning months of 2014 when compared to the same time last year. Gang violence is a leading cause of violence in the country and it’s estimated that some 60,000 young people have gang affiliation. Gang involvement often offers a sense of family and belonging that counters the lack of education and employment opportunities offered in the country.