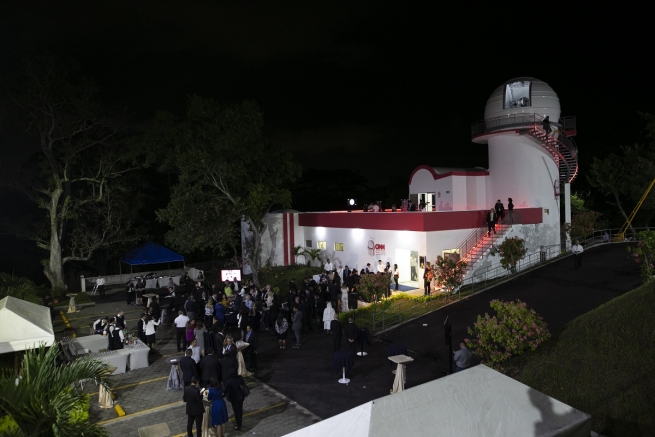 (MissionNewswire) Don Bosco University in San Salvador, El Salvador, has inaugurated the Micro Macro Observatory, a scientific center dedicated to astronomy and natural sciences. The observatory is unique in Central America and will allow the public to view the smallest of particles that are impossible to perceive with the naked eye, as well as the expansive universe.

The observatory represents a milestone in the history of education and scientific development in El Salvador and is of particular importance for the Salesian educational mission on behalf of youth. The observatory will promote new perspectives in education and research for the benefit of the new generations in the Central American country and the region.

Salesians with Don Bosco University explained, “The observatory will help people to expand their ability to perceive reality, understand their position in the world and consequently, their responsibility toward the common home.”

The Micro Macro Observatory is equipped with the most powerful telescope in Central America, with a diameter of 50 centimeters, as well as secondary telescopes, one of which is for observing the sun. Furthermore, it is equipped with biological, stereoscopic and digital microscopes. The observatory will offer a unique experience of immersion into the micro- and macro-cosmos.

This innovative space was developed and created in collaboration with the German foundation Karlheinz Wolfgang Foundation for Health and Education, which has had a collaborative relationship with the Don Bosco University since 2006.

During the inauguration ceremony, Salesian Brother Mario Olmos, the rector of the Don Bosco University, underlined that the project includes three fundamental components: the physical infrastructure of the observatory, the technological equipment, and the academic-scientific aspect of a university project, which will foster new careers and professions.

Salesian Provincial for Central America, Father José Ángel Prado, noted that with this new space the Don Bosco University is putting into practice what the Catholic Church has emphasized over the centuries, namely that philosophy, science and faith complement each other.

Initially the observatory will provide education to teachers and staff from other educational institutions, but will later open its doors to the general public including students at all educational levels, their families and the whole community.

Don Bosco University is one of the most prestigious institutions of higher education in the country, particularly in the technical and technological sector. The university has close to 6,000 students enrolled and maintains a strong link to the local employment sector through research, technology transfer programs, continuing education courses and consultancy services. Degree programs are offered in engineering, social sciences, humanities, economics, technology and aeronautics, among others.

Crime is often associated with poverty and close to 35 percent of El Salvador’s population lives in poverty, according to the World Bank. Youth in El Salvador are confronted not only with poverty, but with instability, high levels of violence and inadequate access to educational opportunities. Despite ranking high for economic indicators, the need for practical education in El Salvador is more important than ever with 12 percent of youth ages 15 to 24 unemployed and 41 percent underemployed.