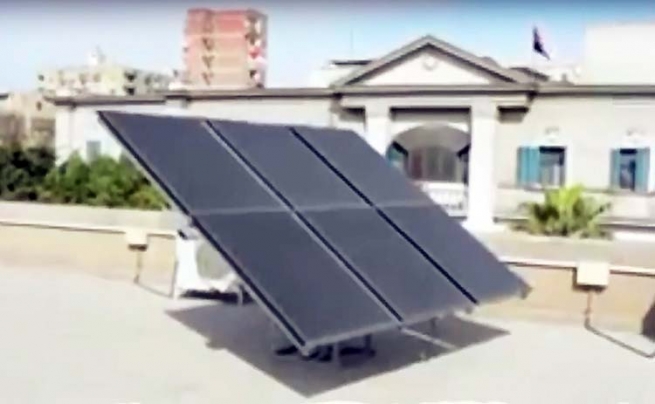 (MissionNewswire) Salesian missionaries operate the Don Bosco Industrial Technical Institute in Cairo, Egypt, which has been a center of excellence for some time. Every year, the institute trains youth as industrial experts, prepares them to enter the workforce and helps the country maintain a high level of industrial development. In recent months, a number of innovative projects have been developed in the field of renewable energy.

“In the past three months, the students at the Don Bosco Industrial Technical Institute have been working on the development of two innovative prototypes to implement solar power,” said the manager of the French Agency for Development. “This project was carried out in cooperation with AFD, IECD and Schneider Egypt in order to provide students with the tools and skills needed in the target market.”

Teachers from the Don Bosco Institute described the details of this project. They note students are working on developing a pump, which will use the energy generated by the sun through panels, without the use of batteries. It will be used for soil or water or to fill a tank depending on the energy generated in such a way that when the pump has more energy it will produce more water. A second project is also underway to develop ideas for how to provide a small house with solar energy, in addition to using the national power grid, depending on the availability of the sun.

“The idea of ​​the project is to teach students, the next generation of engineers, to be familiar with new technologies for the use of solar energy,” said an Egyptian manager of Schneider. “Of course, we know well the shortcomings and difficulties of our country from an economic point of view and rising costs. This is why we are concerned about the next generation of engineers.”

Students are also excited about learning how to use and develop solar energy and the ways in which it can produce clean energy. One student, Joseph, noted that the project is helping him to work better and faster with solar energy because he has had to deal with problem resolution, and this helped him to become a better technician.

According to the United Nations Development Program (UNDP), 26 percent of Egypt’s population lives in poverty, while 49 percent of those living in Upper Egypt cannot provide for their basic needs of food and shelter. Egypt’s unemployment rate has reached 13.2 percent and that number almost doubles for women totaling 24.2 percent. Egypt, the 15th most densely populated country in the world, has been experiencing a rise in poverty and food insecurity for the past three years, according to reports released by the United Nations food agency and its partners.

The country has witnessed significant political and economic changes since 2011. Through this transition, which includes periods of political unrest, the main income sources of the economy have been negatively impacted, particularly in the tourism sector. This also includes revenues from the Suez Canal, oil and remittances from Egyptians working abroad that have been affected by the global economy.

Despite the visible progress to achieve the Millennium Development Goals, Egypt has not reached the anticipated targets for poverty reduction, environment protection and gender equity. Egypt is still working on issues related to gender equality and the empowerment of women.

ANS – Egypt – Higher Education in the Salesian School in Cairo