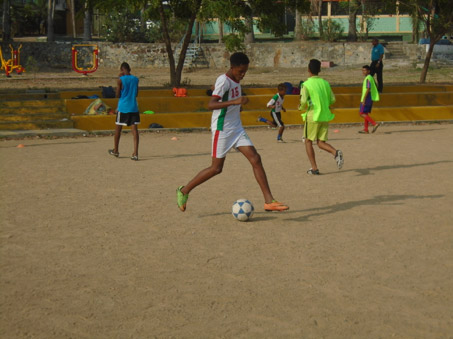 (MissionNewswire) A donation, provided through Salesian Missions to the Guayaquil Salesian Project Foundation, has helped subsidize programming for the Father Antonio Amador Soccer School at the Don Bosco House located in the city of Guayaquil. The foundation has made a commitment to offer children, adolescents and older youth a place to practice sports with a particular focus on reaching the most vulnerable and at-risk youth and ensuring that girls and young women have equal access to their programs and facilities.

The Father Antonio Amador Soccer School, which has been in operation for 21 years, uses soccer training to help its students develop emotionally and learn skills that help them reach their potential. Youth who are a part of the soccer school train each day with two experienced instructors. They also participate in tournaments and are provided sports clothing and equipment.

Carlos Andrés Cobeña Nazareno has been a part of the soccer program for 11 years. He arrived at the program after being mugged on the street after taking the wrong bus. He was severely injured and required a stay at the hospital. Eventually, he was able to start attending both the soccer school and other Salesian programs that provided him shelter and education.

“The Salesian program provided me with the values and the knowledge that I need to prepare myself for the future,” says Nazareno. “The soccer school is great because it allows me to be healthy and in a good mental and physical state. I do not have any family and need to leave because I just turned 18, but the program has allowed me to demonstrate the knowledge that I learned as a volunteer. In the meantime, I am also finishing my high school degree.”

Through soccer, youth are able to develop emotional and learning skills, strengthen their logical capacity to think about the most appropriate play, socialize, work as a team, learn to lose and tolerate frustration. The soccer school runs throughout the entire year has 98 youth currently enrolled in the program.

Some of the youth in the soccer program also participate in other Guayaquil Salesian Project Foundation programs. Twenty of the youth are from shelters, 19 from the Father Antonio Amador Elementary School and 59 from several of the most vulnerable communities in Guayaquil. The neighborhoods are marked by extreme poverty and a lack of basic services such as drinking water and sewage as well as the harmful presence of gangs and a proliferation of drug use.

“This sport is fundamental for children’s comprehensive development,” says Ricardo Javier Jara Cardoso, one of the soccer instructors. “It’s a great method for social adaptation and with the intervention of the right individuals where training is concerned, it is a great source of values. For me, as a trainer and educator, integrity is fundamental because it consists of helping them become better people away from vices and bad habits. Sports help individuals become better people. When children play soccer in a formal environment, they learn how to work as a team, how to enjoy their free time and identity formation.”