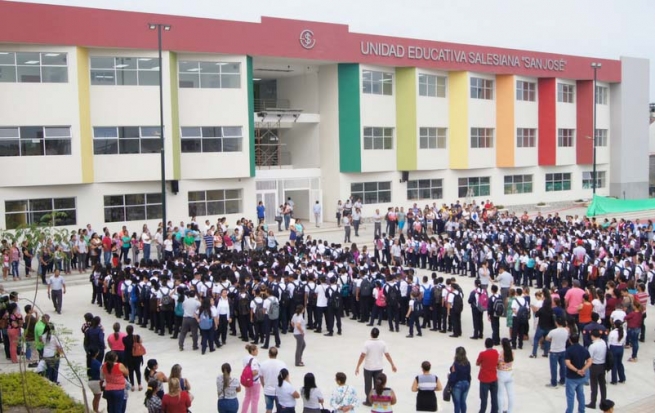 (MissionNewswire) Salesian missionaries have inaugurated new school buildings after they were destroyed in the 7.8 earthquake that killed close to 700 and initially left tens of thousands homeless in Ecuador. The earthquake, which struck on April 16, 2016, destroyed water systems, collapsed roads and affected 33 health centers. In addition, 560 schools and close to 10,000 buildings were either damaged or completely destroyed.

The hardest hit areas are in the Manabi province which includes the cities of Manta, Portoviejo and Pedernales. Immediately after the earthquake struck, Salesian missionaries living and working in the area responded, helping to dig through rubble to look for trapped survivors and providing assistance to those affected. Salesian programs across the country worked to collect emergency aid and coordinate volunteer efforts.

By the end of that April, Salesian missionaries had put a plan into place to assist more than 42,000 affected by the earthquake. Soon after the immediate relief efforts, Salesian missionaries also began to lay out plans to rebuild and recover in the areas that had been hardest hit, including their own programs that had been affected. The Salesian center in Manta, near the epicenter of the earthquake, was the hardest hit. The parish church was destroyed, the old building that housed the educational institute had to be completely demolished, and the Salesian house for retreats was damaged.

The new buildings inaugurated in the first phase of the reconstruction efforts included a building for general classrooms and a new building to house the physics, mathematics, biology and chemistry labs and three classes for computer science. There is also a new central courtyard, a refectory, an area with synthetic grass and a multipurpose field. The second phase of reconstruction includes the development of a new administrative building, an auditorium and a gym. The reconstruction was made possible thanks to funding from private donors, the Salesian Province of Ecuador and the Salesian community of Manta.

“Because Salesian missionaries live in the communities they work, they are often among the first to respond in times of crisis and they are there long after other humanitarian aid has left,” says Father Mark Hyde, director of Salesian Missions, the U.S. development arm of the Salesians of Don Bosco. “Salesian missionaries will continue to rebuild communities in Ecuador, helping people to rebuild physical structures but also rebuild their livelihoods through education and skills training.”

Salesian missionaries have been serving youth in Manta for more than 70 years. In 1942, the first Salesian missionaries arrived in the city and were led by the director, Father Telmo Andrade. Two years later, Father Julio María Haro arrived to launch a school and take care of a parish. The first Salesian missionaries knew that education was critical, and in 1944 began the construction of what would become the Salesian Educational Center of San Jose. The center includes a school attended by 1,350 students, the parish Our Lady of the Rosary, the festive oratory, the retreat house Santa Maria de Crucita and the temple dedicated to Saints Peter and Paul.