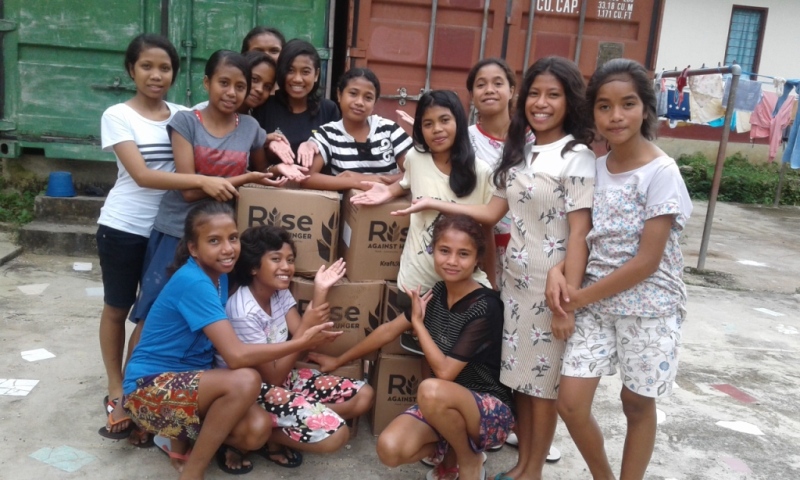 (MissionNewswire) Youth attending 10 Salesian schools, centers and parishes in East Timor have access to better nutrition thanks to a partnership between Salesian Missions, the U.S. development arm of the Salesians of Don Bosco, and Rise Against Hunger, an international relief organization that provides food and life-changing aid to the world’s most vulnerable. The rice-meal donation was provided to the Don Bosco Foundation in East Timor and shared with several Salesian parishes, the Don Bosco Fuiloro Technical High School, Don Bosco Maliana Technical High School and other programs.

This shipment, which arrived in January 2019, provided donated rice-meals to youth during the school day to ensure students had a healthy meal each day and to seniors and other youth who attended Salesian programming in parishes.

“Hungry students have trouble focusing on their studies and learning,” says Father Mark Hyde, director of Salesian Missions. “Proper nutrition is needed to fully take part in classroom and in-field training. Prepared students are more likely to learn valuable skills that will help them gain employment and break the cycle of poverty in their lives while enabling them to give back to their communities.”

In the city of Maliana, Don Bosco Co-Educational Technical School is an important educational center. The school is currently focused on improving its overall facilities, including the kitchen and dormitory, and enlarging its provisions of filtered drinking water.

At the Don Bosco Technical School, vocational education helps youth gain an education and prepare for the future. It serves more than 250 students, 11 percent of whom are girls, who take three-year courses in carpentry, mechanics or electronics. Each year there are more than 400 applications for the 84 student spots. Final year students are required to design and produce a product that encompasses much of what they have learned over the previous three years.

One young student, Joao Zacarias, noted that he’s very grateful for the rice-meals because it has enabled him and his friends to focus on their studies and have the energy for other activities. He’s grateful for the support of Salesian Missions and Rise Against Hunger.

Rise Against Hunger partners with Salesian Missions, which works to identify needs and coordinate delivery of 40-foot shipping containers full of meals and supplemented with additional supplies when available. The partnership was developed in 2011 and since that time shipments have been successfully delivered to 20 countries around the globe. The meals and life-saving aid have helped to nourish poor youth at Salesian schools and programs and care for those in need of emergency aid during times of war, natural disasters and health crises.

East Timor is home to 1.26 million people and according to the Human Development Index, the country ranked 132 out of 188 for life expectancy, access to education and standard of living in 2018. The World Bank estimates that East Timor has close to 42 percent of its population living in poverty with over one-third of the population regularly experiencing food shortages. In addition, close to 50 percent of the population is illiterate.