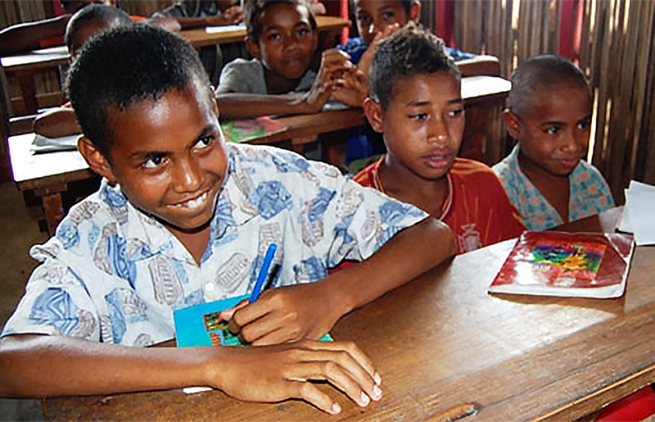 (MissionNewswire) Salesian missionaries in East Timor have been providing programs to help residents recover and rebuild in the wake of a devastating civil war in the country that claimed countless lives, decimated entire communities and resulted in living conditions that are among the worst in the world. Now that the violence has subsided, efforts are being focused on helping the poor, restoring hope and providing new opportunities for the future.

In the city of Maliana, the new Don Bosco Co-Educational Technical School is already an important center of education. In 2016, 28 students graduated with 18 accepted into further studies at the university level. The school is focused on improving its overall facility including the kitchen, dormitory accommodations and provision of filtered drinking water. Another Salesian technical school, Don Bosco Training Institute in the city of Comoro, has more than 200 students, 40 percent of which are female. A number of students receive support from the Australian Ron Archer Trust and the John Herbert Foundation to complete their studies. Courses are offered in general construction, automotive and office administration. After graduation many students secure employment in Dili while others return to their home village.

In addition to technical education, Salesian missionaries in East Timor also focused on agriculture training. In the city of Fuiloro where 75 percent of the population earns a living though farming, Don Bosco Agricultural College plays an important role in promoting better care of livestock and increasing the yield from crops. In 2017, there was an increase in enrollment applications and now more than 200 students take courses at the college. The school is aiming to become more self-sufficient by increasing farm production of corn, animal feed, varied horticulture, coconut oil and improved livestock intake.

Salesian missionaries also have a focus on educating young women and girls in East Timor. The Salesian-run Madalena Morano Center in Fuiloro offers women courses in computing, basic office management and sewing. There are 54 women who come from families facing high poverty. Many graduates secure work in Dili or Baucau. In Laga, 98 girls aged 6 to 16 are provided a home, an education, and a secure environment at the Salesian-run Laura Vicuna Orphanage. Traditional education is taught in addition to studies in theatre, dance, music, sewing and sports to encourage young girls to develop their skills and talents.

“Salesian programs are so successful in part because they remain flexible and diversified to meet of the needs of their students,” says Father Mark Hyde, executive director of Salesian Missions, the U.S. development arm of the Salesians of Don Bosco. “Being an integral part of the communities in which they work, Salesian missionaries are aware of local needs first-hand and are then able to develop programs to directly address those needs.”

East Timor is home to 1.1 million people and according to the Human Development Index, the country ranked 133 out of 188 for life expectancy, access to education and standard of living in 2015. The World Bank estimates that East Timor has close to 49 percent of its population living in poverty with over one-third of the population regularly experiencing food shortages. In addition, close to 50 percent of the population is illiterate.