DR Congo: Salesian Youth Have Better Nutrition Thanks to Rice-Meal Donation from Feed My Starving Children 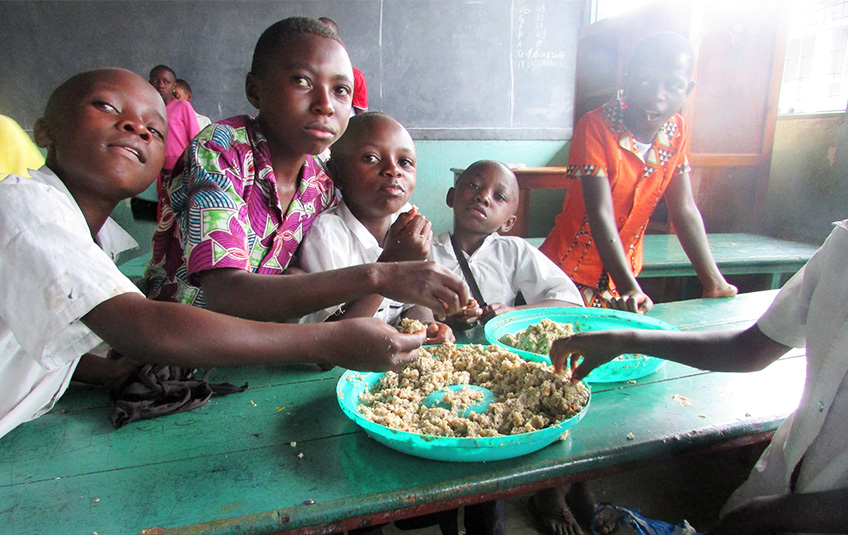 (MissionNewswire) Youth taking part in school and other social development activities within different programs operated by Don Bosco Ngangi Center in the Democratic Republic of Congo benefited from a recent shipment of rice-meals thanks to an ongoing partnership between Salesian Missions and Feed My Starving Children, a nonprofit Christian organization committed to “feeding God’s children hungry in body and spirit.” The Don Bosco Center Ngangi, located in the eastern city of Goma, has been providing social development, medical and educational services to poor youth and their families since 1988. Currently, there are more than 4,600 people accessing the center’s services.

Started first as a youth center, the Don Bosco Center expanded to provide assistance to those in the region affected by war, other violence and natural disasters. In 1997, the center added a kindergarten, elementary, secondary and vocational schools as well as a literacy center and medical facility. The center also provides aid and services to the many refugee camps that exist in the areas surrounding Goma. Refugees, orphans, abandoned children and victims of disaster are among the school students who rely on the center. For most of them, it’s also the only place where they receive a nutritious meal each day.

“A child who does not eat as it is required cannot perform well in his studies and cannot be involved in other activities organized by the center,” explains Father Kubuya Luanda Dominique, a Salesian priest in Goma. “This food donation has tremendously helped our children and youth to respond positively in many activities and helped them to physically grow, including gaining some much-needed weight.”

Salesian missionaries are also reporting that since receiving the food aid, the number of children seeking medical care at the center’s medical clinic has also decreased. One 12-year-old Salesian student, Evariste, weighted just 50 pounds when he was first given the food aid. After a few months, he’s already gained eight pounds. The doctor operating the Salesian medical clinic has also noted the positive impact the food-aid donation has had on the children.

“Don Bosco Center Ngangi is one of the most diverse and comprehensive Salesian organizations in the Democratic Republic of  Congo,” says Father Mark Hyde, executive director of Salesian Missions, the U.S. development arm of the Salesians of Don Bosco. “Built on the grounds of a school and sports field, the center has grown substantially. Despite overwhelming obstacles confronting these children—not to mention the challenges of teaching and feeding them with limited resources—the results are encouraging and inspiring.”

The Democratic Republic of Congo has been plagued by intense civil war and internal conflict since the outbreak of fighting in 1998. As a result, there have been close to 5.4 million deaths, according to the International Rescue Committee. Most deaths resulted from non-violent causes such as malaria, diarrhea, pneumonia and malnutrition, all typically preventable under normal circumstances but often fatal in times of conflict. Close to 1.5 million people have been internally displaced or have become refugees in neighboring countries after having fled the country to escape the continued violence.

Young people make up about 19 percent of the country’s population but account for 47 percent of deaths during this conflict. Poverty is rampant, according to UNICEF, and 72 percent of rural households and 59 percent of urban households are poor. Nearly 40 percent of children under 5 suffer from chronic malnutrition and most of the population lives with moderate to serious food insecurity. The 2015 Human Development Index ranked the Democratic Republic of Congo 176 out of 188 countries and territories listed.

Salesian missionaries have been working in the Democratic Republic of Congo for more than 100 years ensuring that the most vulnerable children are not forgotten. Salesian primary and secondary schools and programs lay the foundation for early learning while Salesian trade, vocational and agricultural programs offer many the opportunity for a stable and productive future.