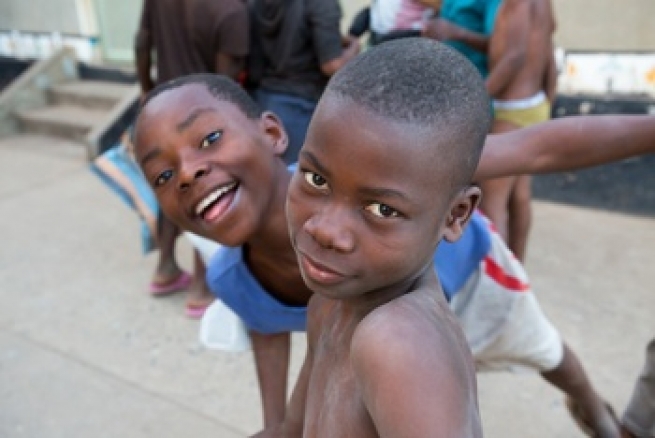 (MissionNewswire) Father Eric Meert, a Belgian Salesian priest, is one of the leaders of the Opera Mamma Margherita program operating in Lubumbashi, the second-largest city in the southeastern part of the Democratic Republic of Congo. Fr. Meert contacts local street children within the city offering them shelter, education and reunification with their families, if possible.

Street children in Lubumbashi are often driven out of their homes because they are accused of witchcraft or theft. Some move away because their families cannot care for them because of poverty. They are left to become street children in the slums and in the marketplaces, sleeping and living in the open, exposed to all forms of danger and violence.

When Fr. Meert first approaches the youth, he must be careful to show interest in them and their stories of how they arrived on the streets. Once he is able to gain their trust, Fr. Meert can invite them to come to Bakanja Ville, the Salesian center for homeless children. It is essential that the decision to go to the Salesian center be made by the children. The choice of a new life must come from them. When the children take this step, they receive first aid and a shower, and can play in a safe place.

If youth express that they want to leave street life permanently, they are able to go to one of the Salesian rehabilitation centers that operate in the city. Once in the Salesian centers of Michael Magone or Cité des Jeunes, youth are able to access literacy classes, schooling, psychological and spiritual care, and later technical and vocational training.

“The goal of the program is to first and foremost help children come in off the streets into a safe environment where they can access shelter and food and connect with caring adults,” says Father Mark Hyde, executive director of Salesian Missions, the U.S. development arm of the Salesians of Don Bosco. “Salesian missionaries will try to reunite youth with their families, if possible. If not and the child is willing, they will be placed in a long-term program where their basic needs are met and they can attend school to one day become contributing members of their community.”

The DR Congo has been plagued by intense civil war and internal conflict since the outbreak of fighting in 1998. As a result, there have been close to 5.4 million deaths, according to the International Rescue Committee. Most deaths resulted from nonviolent causes such as malaria, diarrhea, pneumonia and malnutrition, all typically preventable under normal circumstances but often fatal in times of conflict. Close to 1.5 million people have been internally displaced or have become refugees in neighboring countries after having fled the country to escape the continued violence.

Young people make up about 19 percent of the country’s population but account for 47 percent of deaths during the conflict. Poverty is rampant, according to UNICEF, and 72 percent of rural households and 59 percent of urban households are poor. Nearly 40 percent of children under five suffer from chronic malnutrition and most of the population lives with moderate to serious food insecurity. The 2014 Human Development Index ranked the DR Congo 176 out of 188 countries and territories listed.