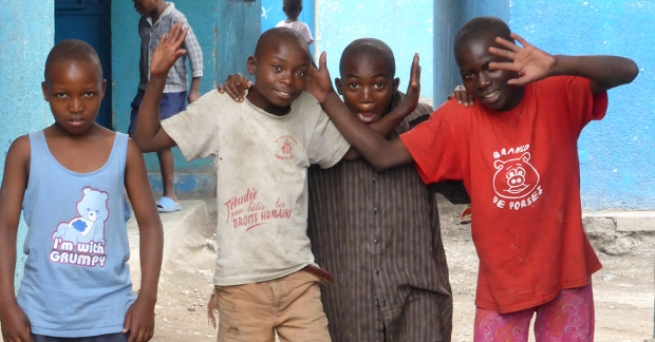 (MissionNewswire) Salesian missionaries in Uvira, within South Kivu province if the Democratic Republic of Congo, are providing young children and older youth an opportunity to go to school. Many of these young students are former child soldiers, street children, children accused of witchcraft, abused women and single mothers who have had their rights violated and been denied a chance to gain an education – leaving them particularly vulnerable to violence and exploitation.

The educational project educates 30 young children and 40 older youth. Salesian missionaries provide school transport, the purchase of desks, provision of school supplies for teachers and students, the salaries for teachers, production of tools, and the organization of recreational, sports and cultural activities. Beginning with a remedial education with a focus on literacy, the project works to raise the students’ knowledge base in order to prepare them for advanced skill training. The school program includes a daily meal for each student as well as sports that are offered twice a week.

“Most of these young people have very limited education,” says Father Mark Hyde, executive director of Salesian Missions, the U.S. development arm of the Salesians of Don Bosco. “They have attended a few years of primary school and then left because their circumstances didn’t allow them to continue in school. Salesian missionaries started the educational project so youth and single mothers could learn a trade and gain employment, breaking the cycle of poverty and becoming contributing members of their community.”

Salesian missionaries have been working in the Democratic Republic of Congo for more than 100 years ensuring that the most vulnerable children are not forgotten. Salesian primary and secondary schools and programs lay the foundation for early learning while Salesian trade, vocational and agricultural programs offer many the opportunity for a stable and productive future.

The country has been plagued by intense civil war and internal conflict since the outbreak of fighting in 1998. As a result, there have been close to 5.4 million deaths, according to the International Rescue Committee. Most deaths resulted from non-violent causes such as malaria, diarrhea, pneumonia and malnutrition, all typically preventable under normal circumstances but often fatal in times of conflict. Close to 1.5 million people have been internally displaced or have become refugees in neighboring countries after having fled the country to escape the continued violence.

Youth make up about 19 percent of the country’s population but account for 47 percent of deaths during this conflict. Poverty is rampant, according to UNICEF, and 72 percent of rural households and 59 percent of urban households are poor. Nearly 40 percent of children under five suffer from chronic malnutrition and most of the population lives with moderate to serious food insecurity. The 2013 Human Development Index ranked the Democratic Republic of Congo 186 out of 187 countries and territories listed.