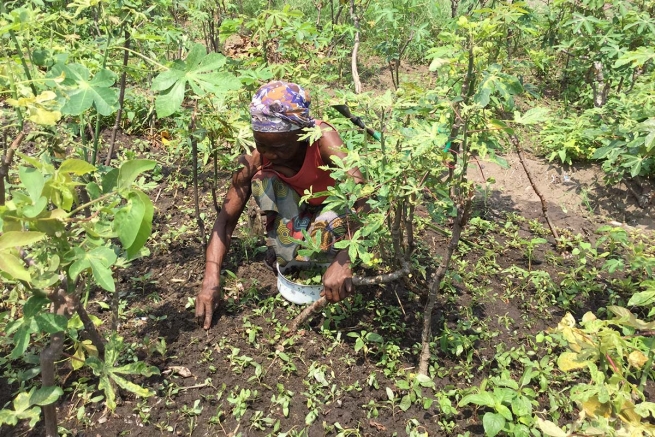 (MissionNewswire) Salesian missionaries in Mont Ngafula, a municipality of Kinshasa, the capital of the Democratic Republic of Congo (DRC), have launched a new project to help women of the parish start small agricultural activities that generate income. The small town of Mont Ngafula is isolated because there is no roadway that connects it to the city. This causes some of the economic challenges. There is also a lack of water and electricity and few jobs for the residents. Families have difficulty meeting their basic needs in the community due to its many challenges.

Inside the Don Bosco mission’s grounds there are already small plots of land set aside for the production of vegetables, fruit and cereals, as well as for breeding small farm animals. All of these farming activities contribute to the sustenance of families. Empowered by this experience, the women have set the goal of achieving food self-sufficiency through the cultivation of vegetables that, once the gardens are fully operational, can be sold to the market.

To launch this project, Salesian missionaries will provide modern and integrated training for women in the agricultural sciences. Within a year, the goal is for 80 percent of participants to be able to benefit from a supply of seeds and tools to renew cultivation in their own gardens. Then, after the harvest, they will be able to reimburse Salesian missionaries for the loan of the means of production, delivering to them 20 percent of the vegetables to feed orphans who are guests of the Maison Papy community, another structure within the mission.

At the same time, Salesian missionaries will work to increase the capacity of the current water well so that the issue of water scarcity will be addressed. In the long term, the community of Mont Ngafula will be able to extend the cultivated land and produce vegetables that can be sold in the city. This will also ensure that 107 families will have a more stable income and be able to pay for their children’s studies.

“This project is the perfect example of how Salesian missionaries are able to impact whole communities. Mothers are able to access training and initial support to launch small farms, which will then support their families and give back to their communities,” says Father Mark Hyde, director of Salesian Missions, the U.S. development arm of the Salesians of Don Bosco. “Salesian missionaries provide education and workforce development paired with other social services to help poor youth and their families break the cycle of poverty and have hope for the future.”

The DRC has been plagued by intense civil war and internal conflict since the outbreak of fighting in 1998. As a result, there have been close to 5.4 million deaths, according to the International Rescue Committee. Most deaths resulted from non-violent causes such as malaria, diarrhea, pneumonia and malnutrition, all typically preventable under normal circumstances but often fatal in times of conflict. Close to 1.5 million people have been internally displaced or have become refugees in neighboring countries after having fled their own country to escape the continued violence.

ANS – Democratic Republic of the Congo – Development and food self-sufficiency: mothers as protagonists