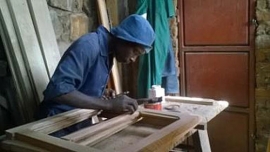 (MissionNewswire) Salesian Father Piero Gavioli deals with the harsh reality of the growing number of street children in the city of Bukavu located in the eastern region of the Democratic Republic of Congo (DRC). In 2014, in order to address some of the needs of these youth, Salesian missionaries opened the Don Bosco Center. Operated by two Salesian priests and one Salesian brother, the center is located near the main town square and a prison, giving missionaries the ideal location to meet the many street children who spend time in the square washing cars, carrying luggage and parcels, stealing and begging.

Shortly after the inception of the Don Bosco Center, a Salesian school was opened on the premises which serves the local population. Beginning with a remedial education with a focus on literacy, the school works to raise its students’ knowledge base in order to prepare them for advanced skill training. Within the first two months of the school’s opening, its first students had advanced to learning French and computer skills and then commenced professional training. The school program includes a daily meal for each student as well as sports that are offered twice a week. The current curriculum spans eight months and graduates trained carpenters, builders and drivers.

In addition to the school, Don Bosco Center offers sports and games four afternoons each week for 100 young people from the community. It also provides French language lessons once a week to more than 50 area youth. The resident Salesian brother at the center participates in Sunday activities in the prison chaplaincy, a well-organized group of religious and lay people who work compassionately with the prison population. Missionaries at the center have been asked to help educate 30 of the younger prisoners so that upon release, they will be able to learn a trade and become productive members of society.

Ishara is one of the youth who benefited from the center. He was born in 1998, the sixth of nine children. Two are already married and one is a single mom. His family lives in Ciriri, on the mountain in a house with mud walls that risk collapse. He is almost an hour and a half walk from the Don Bosco Center. The father abandoned the family and remarried. The mother tries to earn a meager wage to pay for children’s school fees by carrying bags on her head or back.

Ishara tried to make ends meet on his own by selling toys on the street after school, but in the second year of junior high, an accident caused him to lose the money he had saved. He was forced to leave the school and spend entire days on the street. It was then Ishara connected with the Don Bosco Center. He was among the first to enroll in literacy and vocational courses.

Starting with two months of school refresher courses and following the orientation test, he was assigned to the carpentry course. After he reached the end of the year’s courses, Ishara received his certification and completed the three-month internship. He is currently working with an experienced carpenter who has opened a small neighborhood workshop. Ishara already manages to do a lot of work and has started earning some money. He is now able to buy clothes and contribute to his family. The Don Bosco Center is still actively helping Ishara, teaching him how to budget his income and plan for the future.

“All youth deserve a second chance in life and to feel safe and be valued members of their community,” says Father Mark Hyde, executive director of Salesian Missions, the U.S. development arm of the Salesians of Don Bosco. “Students supported by the Don Bosco Center have a real opportunity to gain an education, connect with their peers, and gain the work and social skills needed for long-term employment.”

DRC has been plagued by intense civil war and internal conflict since the outbreak of fighting in 1998. As a result, there have been close to 5.4 million deaths, according to the International Rescue Committee. Most deaths resulted from non-violent causes such as malaria, diarrhea, pneumonia and malnutrition, all typically preventable under normal circumstances but often fatal in times of conflict. Close to 1.5 million people have been internally displaced or have become refugees in neighboring countries after having fled the country to escape the continued violence.

ANS – Democratic Republic of the Congo – Ishara’s story, a boy in the street