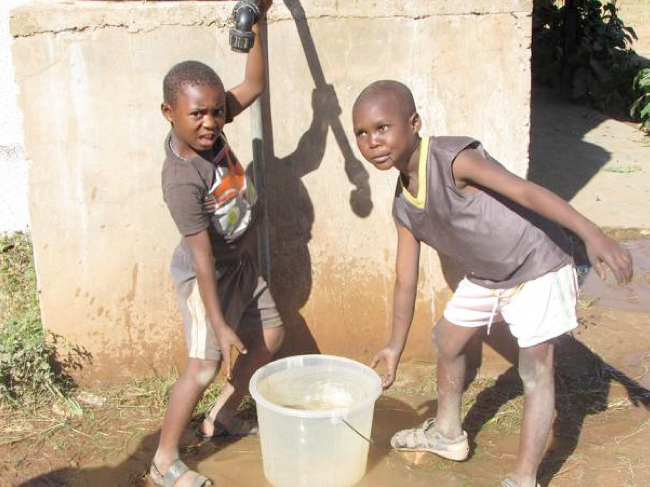 (MissionNewswire) Salesian missionaries at two Salesian training and vocational centers in the city of Lubumbashi in the southeastern region of the Democratic Republic of the Congo just completed water projects thanks to funding provided by Salesian Missions. Close to 4,000 youth, parents, Salesian staff, and community members will benefit from these water projects at the Salesian-run Kansebula St Jean Bosco Institute and Chem Chem Center.

The goal of the projects was a complete renovation of existing water systems, which were outdated, wasting energy, and provided insufficient quantities of water. The Kansebula St Jean Bosco Institute and the Chem Chem Center are providing educational opportunities for at-risk youth living in poverty within in the community. The Kansebula Institute emphasizes a human science curriculum while the Chem Chem Center specializes in agricultural training. Both facilities prepare youth for the workforce but face challenges around energy and water sources due to their remote locations. Neither facility has water services provided by its town or government and must rely on local resources such as wells and rivers.

Salesian missionaries began the two water projects to ensure clean fresh water for the students and the sustainability of the water sources for their facilities. At Kansebula, the new water system allows for uninterrupted water provision, even during energy cuts and while hosting large groups at the facility. The project consisted of erecting a water tower and two 2,500-liter water tanks in connection to the existing water system, improving water management and protect the water pump in use.

Salesian missionaries are able to save funding on charcoal thanks to a filter system installed in the kitchen and after the rehabilitation of the tank and piping system. In addition, new outdoor toilets were built by staff and students at the Salesian vocational training center, giving students an opportunity to practice their skills.

At Chem Chem, the project entailed upgrading the existing water system to allow proper quantities of clean water for students. This was accomplished by deepening the existing well, erecting a water tower and installing two 2,500-liter water tanks.

UN-Water estimates that worldwide there are more than 663 million people living without a safe water supply close to their home and must spend countless hours queuing or trekking to distant sources to look for water and cope with the health impacts of using contaminated water. For those who have no access to clean water, water-related disease is common with more than 840,000 people dying each year from water-related diseases.

In response to this crisis, Salesian Missions, the U.S. development arm of the Salesians of Don Bosco, has made building wells and supplying fresh, clean water, a top priority for every community in every country in which Salesian missionaries work. The two projects in the Democratic Republic of the Congo are just two of many that have been completed, with more in the process.

“Having access to clean water and proper sanitation brings a sense of dignity to the children and families we serve in our programs,” says Father Mark Hyde, executive director of Salesian Missions. “Improving water and sanitation facilities also ensures that teachers and students are working and learning in an environment that promotes proper hygiene and has safe drinking water, reducing the number of waterborne illnesses that can affect those in our schools and keep them away from important study time.”

Salesian missionaries have been working in the Democratic Republic of the Congo for more than 100 years ensuring that the most vulnerable children are not forgotten. Primary and secondary education schools and programs lay the foundation for early learning while Salesian trade, vocational and agricultural programs provide youth with an opportunity for a stable and productive future.