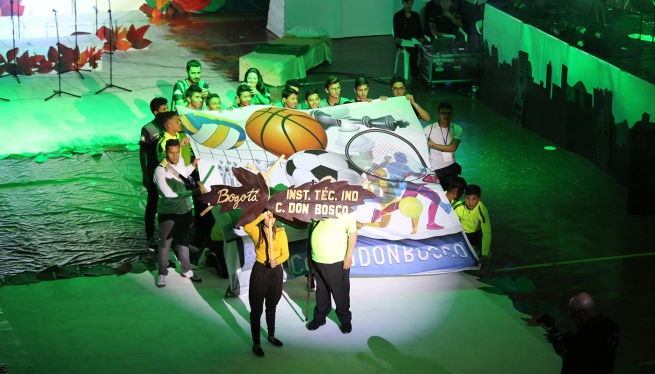 (MissionNewswire) In August, Salesian missionaries held the 13th annual National Salesian Games, bringing together more than 1,000 people including young athletes, families, current and former students, teachers and others. The event, held in Medellin at the Pedro Justo Berrío Institute and El Sufragio School, brought together people from 14 departments across Colombia and focused on volleyball, indoor soccer, basketball and table tennis.

More than 300 student athletes between the ages of 15 and 17 from the Salesian provinces of San Pedro Clave and San Luis Beltrán took part in this event. Over 30 teams participated, sharing the values of joy and friendship promoted by Don Bosco.

“Sporting events, like this competition and ongoing Salesian socio-sports programs, teach youth both on and off the field,” says Father Mark Hyde, director of Salesian Missions, the U.S. development arm of the Salesians of Don Bosco. “Learning and playing team sports encourages leadership skills as well as teaches youth to work as part of a team. Students also learn important social skills and have opportunities for growth and maturity.”

Salesian missionaries provide a range of primary and secondary education as well as vocational and technical training for poor and at-risk youth in Colombia. Salesian programs also ensure that the most basic needs of youth are met including shelter, food, clothing and medical care.

The Salesian-run Don Bosco City, one of the oldest and largest programs for street children in Latin America, has been working with youth for 53 years and has rescued more than 83,000 boys and girls since its inception. In addition to street children, Don Bosco City also works with child soldiers. It is estimated that close to 6,000 minors continue to be utilized as child soldiers with thousands more having reached their 18th birthday after years of combat.

Through its programs at Don Bosco City, Salesian missionaries offer a multi-pronged approach designed to address the broad social issues that contribute to the poverty and exploitation these youth face while training them in the skills necessary to break the cycle of violence and poverty. Currently, there are 900 youth between the ages of 8 and 12 living and receiving education at the program.

The long rehabilitation process focuses on participants learning three key things—how to trust, how to have hope for the future and how to build relationships with others. Psychologists and teachers work together with the young participants, giving them the tools for a better future, including providing basic education and more advanced skills training that will lead to stable employment.

In addition, many orphaned youth in Colombia live in poverty and have lost their parents to natural disasters, the HIV/AIDS epidemic and other diseases, war or domestic issues. Some children remain living with a single parent, struggling to survive, and are often pulled out of school to earn income for the remaining family. Other youth live in shelters or on the streets.