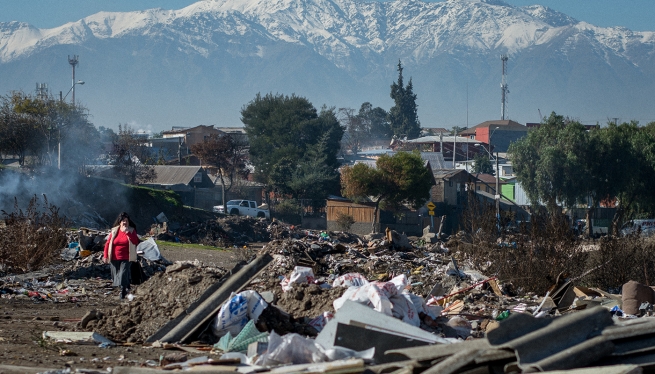 (MissionNewswire) According to the 2016 national census prepared by TECHO, a youth-focused nonprofit present in Latin America that addresses issues of poverty, 38,770 families live in 660 camps throughout Chile. Eighty-one of these camps are in the metropolitan areas. These informal settlements and camps (or shantytowns as they used to be called) are characterized by the occupation of land followed by the construction of homes made of light building materials. They typically have no access to basic urban utilities such as electricity, drinking water and sewage.

The Silva Henríquez Salesian Catholic University strives to address issues of poverty in Camp Giappone, which was established in 2010. It is located in Santiago, on the borders of Maipú and Cerrillos, at the center of a desert site used as a landfill. About 40 families are grouped in 12 houses. There are roughly 120 people that live there with the majority of families headed by women.

Since 2015, Salesian volunteers have been offering various services to the students housed at the camp. These include education, adult literacy, and legal counseling, Volunteers are also working to build water and sewage services for housing. The work of the volunteers is appreciated by the people of the camp. The volunteer Salesian students have been able to provide a sense of dignity and support that they have not received from anyplace else.

Salesian schools, social development services and workforce development programs throughout Chile are helping to break the cycle of poverty while giving many hope for a more positive and productive future. According to the World Bank, although the economy in Chile is one of the more stable and prosperous in Latin America, a little more than 5 percent of the population lives on just $2 a day. The country suffers from high economic inequality which is particularly evident in access to educational opportunities.

“Although the education system in the country is far-reaching, many poor and disadvantaged youth fall through the cracks,” says Father Mark Hyde, executive director of Salesian Missions, the U.S. development arm of the Salesians of Don Bosco. “Throughout the country, young people from poor families lack the educational opportunities available to the middle and upper classes.”

Salesian technical schools in Chile cater to students who have dropped out of school and are seeking a second chance. In many programs, students complete their education while engaging in internships with local employers—increasing their hands-on work experience and chance of gaining livable wage employment after their studies are completed.

“Salesian missionaries working in Chile focus their efforts on providing education and social programs to poor and at-risk youth,” adds Fr. Hyde. “At Salesian schools, universities and youth centers throughout the country, youth can access an education as well as the skills and resources necessary to find stable employment and improve their standard of living.”

ANS – Chile – “It’s not that they want to live that way; it’s their turn.” Volunteers serving the poor.