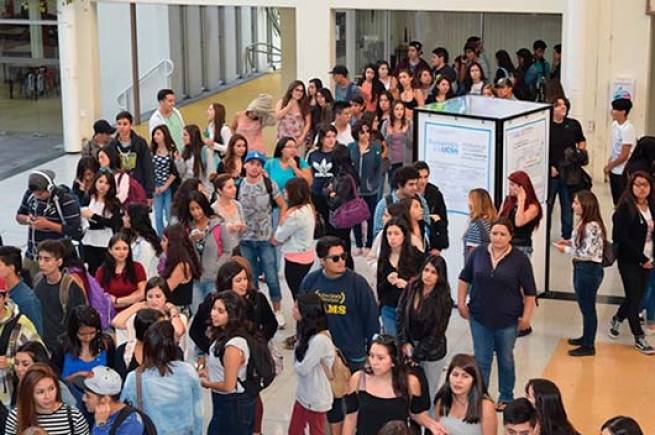 (MissionNewsire) This year, 1,690 new first year students were welcomed at the Salesian-run Silva Henriquez Catholic University located in Santiago, Chile’s capital and largest city. Nearly 64 percent of these students (1,106) were admitted to the university free of charge. Salesian missionaries living and working in the region offer the free university education to students who are unable to afford university education. The goal is to encourage higher learning, help students gain the education needed for a career, and encourage graduates to contribute back to their communities.

In his welcome address, Father Jorge Baeza, rector of the local Salesian community said, “If the decision to study at a university of proven quality constitutes a good choice, then you have made a good choice. Our university has received an institutional certification of quality for four years, which places it above the national average. It also has a five-year quality certification for most of its courses.”

The university was named after Archbishop Raúl Silva Henríquez, who served from 1961-1983, during a period of intense political struggle in the country and culminated in the 1973 right-wing military coup that brought General Augusto Pinochet to power. Archbishop Henríquez was a member of the Salesian religious order dedicated primarily to missionary and educational work.

“Silva Henriquez Catholic University has been successful in providing the education and skills necessary to help its graduates either directly enter the workforce or continue on for advanced degrees,” says Father Mark Hyde, executive director of Salesian Missions, the U.S. development arm of the Salesians of Don Bosco. “Providing free tuition supports the University’s main objective to provide educational programs that increase the professional skills of its students while contributing to the socio-economic development of the country.”

Salesian schools, services and programs throughout Chile are helping to break the cycle of poverty while giving many hope for a more positive and productive future. According to the World Bank, although the economy in Chile is one of the more stable and prosperous in Latin America, a little more than 5 percent of the population live on just $2 a day. The country suffers from high economic inequality which is particularly evident in access to educational opportunities.

“Although the education system in the country is far-reaching, many poor and disadvantaged youth fall through the cracks,” adds Fr. Hyde. “Throughout the country, young people from poor families lack the educational opportunities available to the middle and upper classes.”

Salesian technical schools in Chile cater to students who have dropped out of school and are seeking a second chance. In many programs, students complete their education while engaging in internships with local employers increasing their hands-on work experience and chance of gaining livable wage employment after their studies are completed.

“Salesian missionaries working in Chile focus their efforts on providing education and social services to poor, at-risk youth,” says Fr. Hyde. “At Salesian schools, universities and youth centers throughout the country, youth can access an education as well as the skills and resources necessary to break the cycle of poverty. As a result of the vocational and technical education provided by Salesian programs, Chilean youth are more likely to find stable employment and improve their standard of living.”

ANS – Chile – Start of the Year at Silva Henríquez University: 64.5% of students accepted free of charge