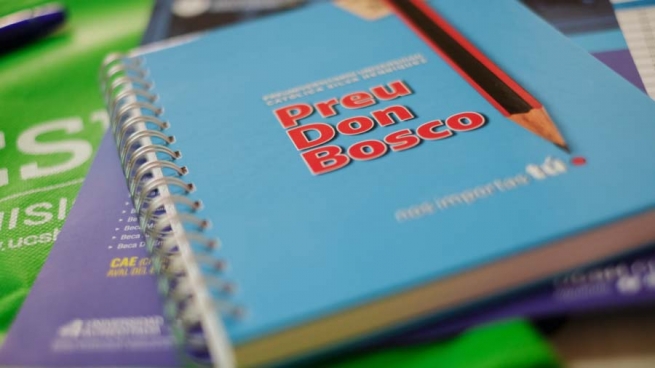 (MissionNewswire) Salesian missionaries in Chile have launched new initiatives with the goal of helping to educate more youth. They have laid the foundation stone for a new St. Domenico Savio building that will become part of the future Salesian Industrial School in Copiapó, a city in northern Chile’s Atacama Desert. Missionaries have also launched the Pre-University Don Bosco, a 100 percent free initiative by the Salesian-run Silva Henríquez Catholic University which is located in the Lo Cañas district of La Florida, a suburb of Santiago.

The Salesian Industrial School of Copiapó will include courses in electronics, automotive mechanics and industrial mechanics as well as courses for electricians and scientific laboratories. The initiative will also include the construction of Don Bosco Hall, a multi-use space for the school and community.

“We have spent the time to ensure that youth have the very best education possible at this new school,” says Father Juan Pablo Moreno, director of the Salesian House in Copiapó. “For young people, we aim to do our best so that they can grow and develop as quality people and professionals.”

In addition to laying the first stone, a wooden box with several symbolic objects was lowered into the foundation. This included images of Don Bosco, Mary Help of Christians, Domenico Savio and Mamma Margherita, school signs, a 2019 school calendar, several coins, a pencil, a new notebook and a copy of the construction plan.

Salesian missionaries also launched the Pre-University Don Bosco which is supported by the Salesian Province, the Silva Henríquez Catholic University and the Institute of the Daughters of Mary Help of Christians. This new tuition-free school will be used to prepare last year secondary students attending Salesian institutes for their entrance into university.

Initially, 70 students will be invited to attend the new school. Director Francisco de Ferari says, “We have many hopes for this pre-university center. We know that students will derive the maximum benefit from it.”

In a statement to youth, Juan Pablo Vásquez, director of the Salesian Schools Network, said that the project seeks to foster Salesian talents, giving them the possibility of continuity. He emphasized, “You are here for yourself first, because you are working for your life project.”

The Silva Henriquez Catholic University was launched in 2016. Nearly 64 percent of its 1,106 students were admitted to the university free of charge. Salesian missionaries living and working in the region offer this free university education to students who are unable to afford it. The goal is to encourage higher learning, help students gain the education needed for a career and encourage graduates to contribute back to their communities.

According to the World Bank, Chile has a fairly low poverty rate of 14.4 percent. However, the country struggles with high rates of income and education inequality. Salesian missionaries working in Chile focus their efforts on providing education and social services to poor and at-risk youth. At Salesian schools, universities and youth centers throughout the country, youth can access an education as well as the skills and resources necessary to break the cycle of poverty. As a result of the vocational and technical education provided by Salesian programs, Chilean youth are more likely to find stable employment and improve their standard of living.