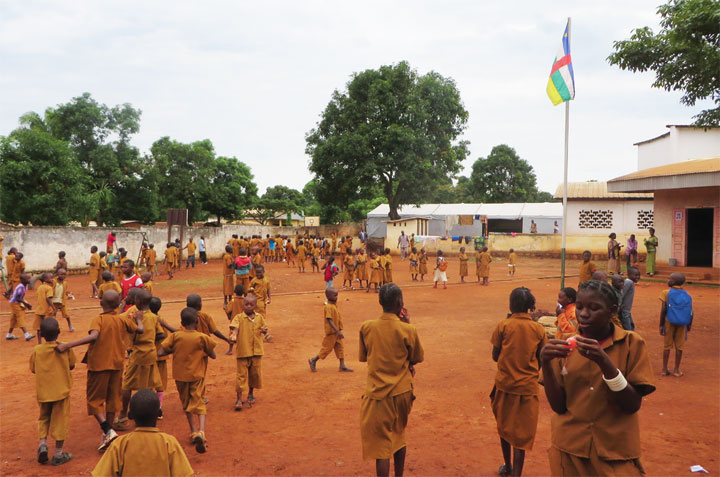 (MissionNewswire) After more than a year of ongoing violence, peace is returning to the Central African Republic. Small markets are opening, taxi service is returning and residents are able to move back and forth between locations. Many parents are bringing their children to classes at two Don Bosco centers in the capital city of Bangui because they know their children will be able to study there in peace. Salesian missionaries at the centers, located in the Damala and Galabadja districts of the city, hope to bring a sense of normalcy and structure to the lives of the local children by returning to a regular schedule of school and social development programs like sports and music.

“For eight months we have been experiencing terror and death in the city of Bangui and throughout the Central African Republic,” says Pierre Pytonie Kozongo, sports coach at the Don Bosco Center Sports Academy in Damala, in an article published on the website of the Salesian-run Spaces of Peace project. “While others have fled, seeking refuge or revenge, the Don Bosco Center has been using sports as a way of bringing people together and overcoming their fears.”

The Salesian Center in Damala has an orphanage, youth center, professional center and high school. At the center in Galabadja, Salesian missionaries offer primary and secondary education along with a college and professional training program. A youth center and medical clinic are also available.

The Spaces of Peace project operates out of both centers and offers youth safe places to learn, work and play. It also offers one meal a day to more than 1500 students during their school day, helps 700 students with school supplies and scholarships and assists 120 older youth gain the skills necessary to find and retain employment.

In addition, Salesian missionaries offer sports, musical training and summer camps, among other activities, where youth of all ages, cultures and religions learn to live and work together peacefully. Through the Spaces of Peace sports programs, youth are taught team work and social skills while gaining opportunities to grow and mature.

“For a group of sixty young people, sporting activities provided the reason for them to meet, play, relax with others and take care of their health,” explains Kozongo. “We, the coaches, were like parents. We followed the development of our young people, and in particular, we were with those experiencing family misfortunes, or those who had been traumatized by the circumstances. The young people encouraged one another to find reasons for confidence in the midst of violence and fear.”

Thanks to an ongoing partnership between the Real Madrid Foundation and Salesian missionaries, footballs, shirts and other items have been donated to help the sports program succeed. The young athletes have shared with each other their experiences of war and have developed friendships through their participation in the program.

Despite more than two years of ongoing violence, Salesian missionaries continue to work diligently for the young and poor in the Central African Republic. Since violence broke out in December 2012 between Séléka rebels and Christian anti-balaka militia groups, thousands have died, more than 650,000 have been internally displaced (with more than 232,000 in the capital city of Bangui alone) and 300,000 have fled across the borders as refugees. Due to the conflict, close to 2.2 million people have needed humanitarian aid, according to the United Nations (UN).

During the height of the conflict, the Salesian center in Galabadja had been host to 20,000 displaced people and the one in Damala had taken in an estimated 50,000. Many arrived at the Salesian centers injured and in desperate need of medical attention. While the situation has improved and many have left the shelter of Salesian centers, the situation remains precarious. Those still internally displaced are homeless and have no other source of shelter and food other than what’s provided at the centers. Resuming educational and social development programs helps youth regain a sense of normalcy and allows them to move past the violence and focus on more productive activities.