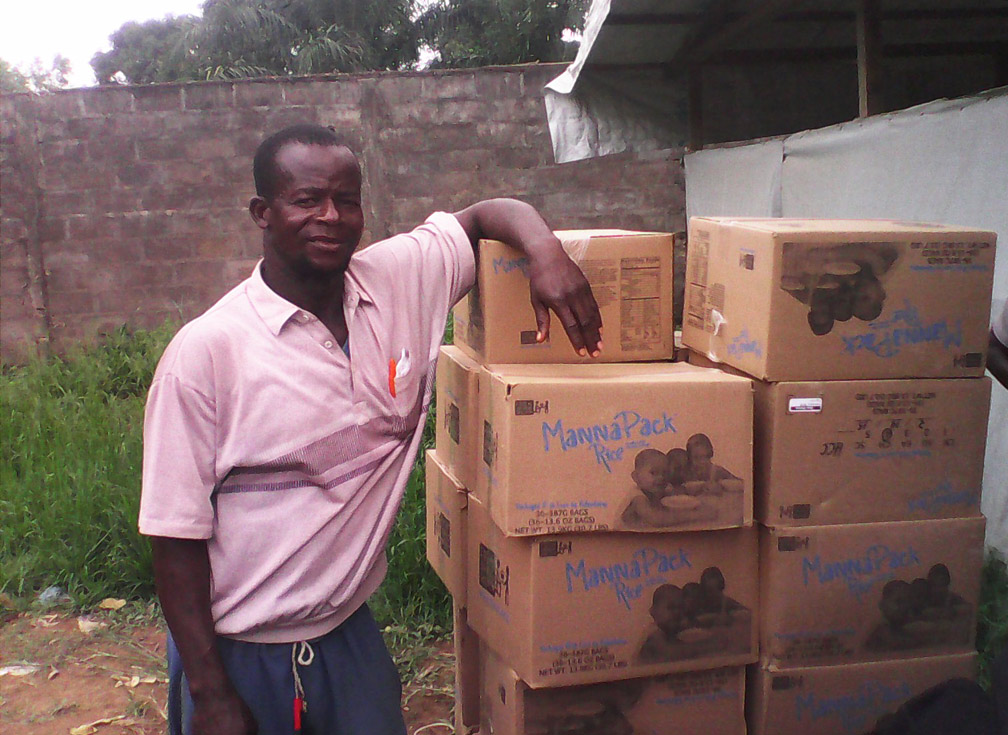 (MissionNewswire) Close to 1,500 women, children and elderly people who have been seeking assistance from Salesian programs after being internally displaced due to recent violence in the Central African Republic have access to better nutrition thanks to an ongoing partnership between Salesian Missions and Feed My Starving Children, a non-profit Christian organization committed to, “feeding God’s children hungry in body and spirit.” A recent shipment of fortified rice-meals from Feed My Starving Children was donated to two Salesian centers: Don Bosco Damala and Don Bosco Galabadja, both located near Bangui, the capital city of the Central African Republic.

Since violence initially broke out in December 2012 between Séléka rebels and Christian anti-balaka militia groups, thousands have died, more than 650,000 have been internally displaced (with more than 232,000 in the capital city of Bangui alone) and 300,000 have fled across the borders as refugees. Due to the conflict, close to 2.2 million people have needed humanitarian aid, according to the United Nations (UN). Earlier in 2015, peace had begun to return to the Central African Republic. Small markets were opened, taxi service returned and residents were able to move back and forth between locations.

A new outbreak of violence has since erupted after a body of a young man was found in September causing residents to flee from their homes again to seek shelter in the country. Those in need have sought refuge and assistance at the two Salesian centers. According to local Salesian missionaries on the ground, the recent clashes have killed close to 60 people and left 300 wounded.

The donated rice-meals were distributed to children, women and the elderly at a Salesian school and church as well as to local villagers. The distribution happened quickly in order to reach the populations in need without any interruption from the armed groups of rebels and bandits. For many families, this donation has brought some relief as it had been several months since they had the supplies for regular meals. The rice-meal donation has improved the health and overall mood of the recipients and helped students to concentrate on their school studies.

“Salesian missionaries are an integral part of the existing infrastructure in many countries and Salesian Missions plays an important role in making sure aid from the United States reaches its destination country and gets into the hands of those who need it most,” says Father Mark Hyde, executive director of Salesian Missions, the U.S. development arm of the Salesians of Don Bosco. “Those who access Salesian programs in the Central African Republic have very little and are in need of the basics like proper nutrition, clothing, shelter and education. This donation will go a long way in helping those who are most vulnerable.”

The Salesian Center in Damala has an orphanage, youth center, professional center and high school. At the center in Galabadja, Salesian missionaries offer primary and secondary education along with a college and professional training program. A youth center and medical clinic are also available.

Both centers operate the Spaces of Peace project where youth of all ages, cultures and religions learn to live and work together peacefully. Through the project, Salesian missionaries offer sports, musical training, summer camps and other activities that promote teamwork and social skills. In addition, the program offers one meal a day to more than 1500 students during their school day, helps 700 students with school supplies and scholarships and assists 120 older youth gain the skills necessary to find and retain employment.

Despite the ongoing violence, Salesian missionaries continue to work diligently for the young and poor in the Central African Republic. Educational and social development programs helps youth regain a sense of normalcy while allowing them to move past the violence and focus on more productive activities.