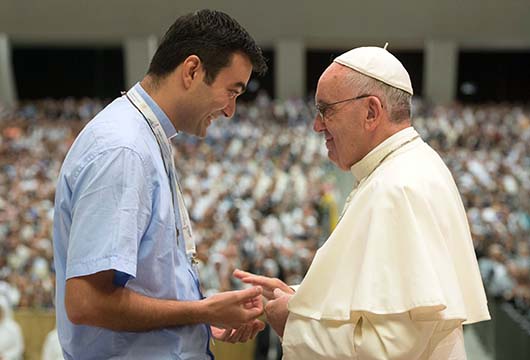 Earlier this year, while speaking to Salesian priests and nuns at a Sunday mass in Turin, Italy’s Basilica of Our Lady Help of Christians, the Pope recounted fond childhood memories of his family’s closeness to the Salesians and how when his mother was ill, he was taken out of public school to spend one year studying with Salesian missionaries. The Pope went on to recall how he grew very attached to the Salesian community during the year he spent with them. Noting how Salesian missionaries go above and beyond classroom teaching by using creative arts, sports and other activities to engage young people, he recalled the creation of a soccer team for Argentinian street children by Salesian Father Lorenzo Massa in 1908.

In anticipation of the bicentennial of  Salesian founder St. John (Don) Bosco’s birth on August 16, Pope Francis sent a letter to Father Ángel Fernández Artime, the Salesian Rector Major. In the letter, Pope Francis praised the work of Don Bosco and the Salesian Family and highlighted Don Bosco’s call to service and his work with poor and disadvantaged youth. Pope Francis also praised Salesian efforts in establishing education and social development services that are open to all youth regardless of language, race, culture or religion.

As part of the letter, Pope Francis states, “A characteristic feature of Don Bosco’s pedagogy is loving kindness, which is to be understood as a love that is manifested and perceived, and reveals itself in caring, affection, understanding and involvement in the life of another person. In the experiential process of education, according to Don Bosco, it is not enough to love, but love needs to be expressed in gestures that are concrete and effective. Thanks to this loving kindness, so many children and adolescents in Salesian settings have experienced an intense and serene emotional growth, which has proved very valuable in the shaping of their personality and in their life’s journey.”

“Salesian missionaries are dedicated to caring for poor youth through programs that are innovative in design and customized to meet local needs,” says Father Mark Hyde, executive director of Salesian Missions, the U.S. development arm of the Salesians of Don Bosco. “Missionaries focus on helping young people become self-sufficient through education and skills training that leads to employment, which in turn builds strong communities.”

Salesian missionaries are widely considered one of the largest private providers of vocational and technical training in the world. Programs focus on helping vulnerable youth in some of the poorest places on the planet by providing access to educational opportunities that match local workforce development needs. Through Salesian skills training programs, youth are able to gain the skills necessary to find and retain stable employment. This work helps grow local economies and breaks the cycle of poverty for poor youth and their families.

“Salesian missionaries are often faced with challenges when providing programs in some of the most difficult environments, especially after natural disasters and in regions plagued by conflict and war, but despite hardship, their mission to bring hope and opportunity to those living in poverty remains strong,” adds Fr. Hyde.