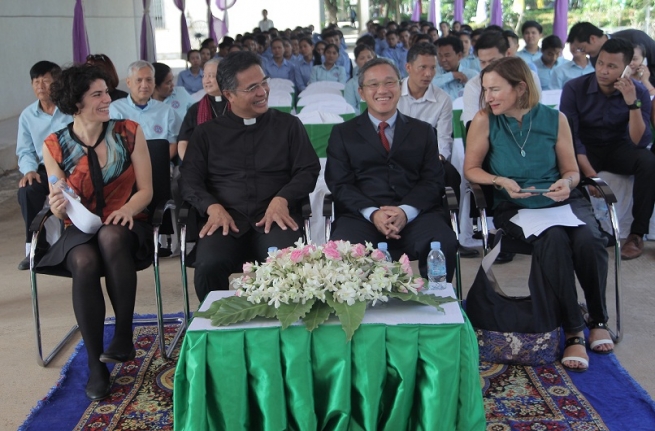 (MissionNewswire) The Don Bosco Foundation has signed a partnership agreement with Schneider Electric’s Cambodia office to supply electrical energy and the construction of a solar-powered water pump at the Salesian Technical School of Phnom Penh. The agreement is a first step toward further collaboration that aims to also involve the electrical training departments of the Salesian centers of Poipet, Sihanoukville, Battambang and Kep. Schneider Electric, a European multinational corporation that specializes in electricity distribution, automation management and the production of installation components for energy management, has partnered on several initiatives with Salesian programs around the globe.

Salesian Father Roel Soto, provincial delegate for Cambodia, and Dr. Ang Koon San, Schneider Electric’s general manager in Cambodia, signed the agreement on July 7 in a ceremony that took place at the Don Bosco Institute in Phnom Penh. Attending the event were members of the education and pastoral community and representatives of the multinational firm.

Schneider Electric’s contribution to Salesian programs means significant support in technical educational projects including a contribution to the latest educational programs in the electrical sector, improved equipment, and ongoing training for both teachers and students. The project also introduces a source of sustainable energy via the solar-powered water pump to the Salesian community.

Sustainable energy supplies are becoming an important option for a country like Cambodia, which is highly dependent on importing energy from neighboring countries. This is one reason why rural areas are energy-poor and isolated. Training Don Bosco students in the energy field helps contribute a highly-qualified workforce to the country as well as helps Salesian missionaries guarantee a high-quality vocational program for vulnerable and at-risk youth.

“Schneider Electric shares the same objectives as the Don Bosco Foundation of Cambodia. We both aim to develop individuals and society through education and vocational training so people can improve and support themselves,” said Fr. Soto.

At the agreement signing ceremony, Fr. Soto spoke about a graduate of the Salesian Center’s electrical department. Fr. Soto noted that after this graduate completed his studies, he started his own business. He began with a motorbike that he and his collaborators would use to go from house to house to do small electrical repairs. After five years, his small firm grew to become a company that coordinated electrical installations  in large construction sites. The training program offered by the Don Bosco Foundation played a central role, allowing this graduate and those that worked for him to break the cycle of poverty and contribute back to their community.

Salesian missionaries have a long history of teaching job skills to youth in Cambodia. Through the United Nations, missionaries began providing technical and vocational education to Cambodian refugees living in camps along the Thai-Cambodian border in the late 1980s. In 1993, at the invitation of the government of Cambodia, a technical school in Phnom Penh was established to republish, translate and write books and educational documents that were destroyed during the Khmer Rouge regime. The technical school contained the only working printing press in the country—and served as a model of hope through education.