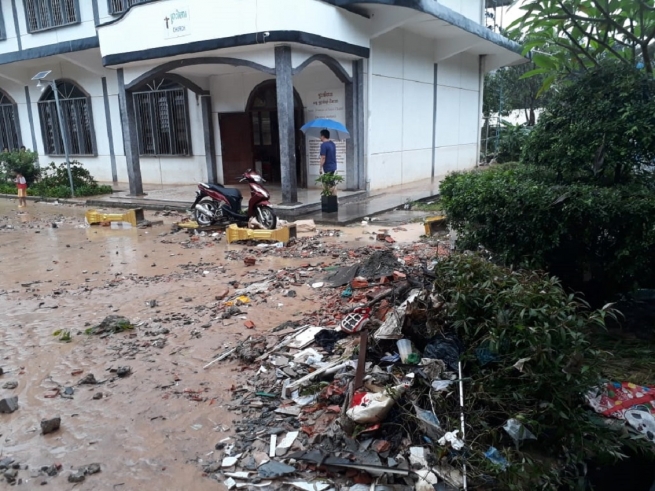 (MissionNewswire) The Don Bosco Technical & Hotel School and the Don Bosco Children Fund Center, located in Sihanoukville, Cambodia, have experienced flooding from the recent Typhoon Lekima that has devastated parts of Asia.

Typhoon Lekima hit Cambodia as a tropical storm and caused coastal flooding in several areas. Before the storm, Cambodia’s Ministry of Water Resources and Meteorology issued a statement urging citizens to prepare for this serious natural event.

Salesian Brother Roberto Panetto, economer of Don Bosco Technical & Hotel School, said, “On the night of Aug. 8, I checked the front of our school because of the heavy rain. I then advised some our staff, families and guests on the ground floor of our guesthouse to watch for water that may come in. The level of the water on the main road in front of our school started to rise and in a matter of few minutes, it was overflowing the dam-wall we had just built to prevent flooding.”

Brother Panetto added that a large amount of water destroyed the gate and the ground floor of the buildings. Machinery and equipment used in the workshops for the mechanical, welding, automotive and electrical classes were heavily damaged. Salesian teachers and staff were also affected. Many had their homes destroyed and have nowhere to go. They have asked Salesians for a place to stay.

“It is too early to estimate the damage, but I presume it will be close to 1 million dollars (US),” added Bro. Panetto. “However, we are happy to see that many Salesians, past pupils and friends are ready to help and encourage us in this difficult time. Thanks to all that have helped us with their prayers and sympathy. We are hoping that benefactors will aid us in replacing the damaged items and help us in preventing future floods.”

Brother Panetto also reflected on the environmental conditions in Cambodia noting that deforestation is one of the main causes for similar floods. Many trees have been uprooted to build hotels, skyscrapers and shopping malls and numerous waterways have been reduced to exploit the land on their banks. In addition, garbage is thrown everywhere and obstructs the already strained drainage system.

The Don Bosco schools in Cambodia are providing technical education for poor youth in subjects including electrical, mechanical, welding, automotive, electronics, computer and information technology, printing, media communication, hospitality and tourism.  After students graduate, they are qualified for jobs that offer a living wage, allowing them to support themselves and their families and break the cycle of poverty.