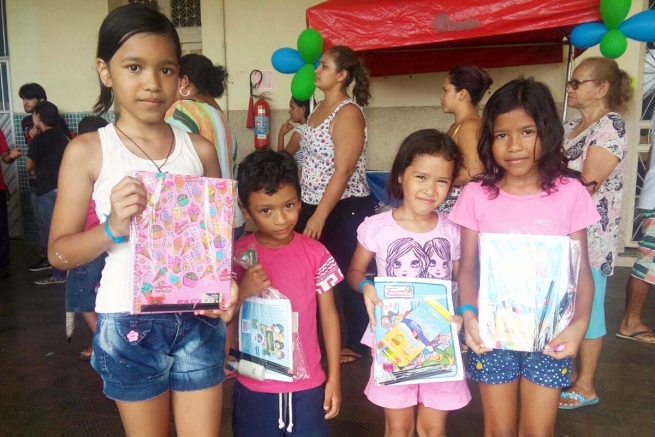 The initiative was carried out at the beginning of the school term because many of the school supplies needed for the classroom are expensive and many poor families cannot afford to purchase them. Basic school materials were collected and distributed to children of the communities near the Shrines of Mary Help of Christians, Queen of Peace and St. Hedwig of Silesia, and other nearby locations. An event was held to distribute the school kits to the children. The event also included games and songs and preventative health activities including dental check-ups. Parents were also able to receive training in parenting and other educational lessons.

“The gap in opportunity between rich and poor continues to be very wide in Brazil, even with government efforts,” says Father Mark Hyde, executive director of Salesian Missions, the U.S. development arm of the Salesians of Don Bosco. “Salesian missionaries are seeing that youth who are already at a social or economic disadvantage fall even further behind because of a lack of access to quality education. Initiatives like these ensure that all students have the school supplies they need to fully participate in their coursework and are prepared at the start of the new school year.”

Brazil has one of the strongest economies in Latin America and is an important agricultural and industrial power in the region. Just over 15 percent of Brazilians live in poverty, with the majority living in the rural northeast of the country, according to the World Bank. While Brazil is making positive changes, there are still large gaps between the poor and the rich and issues of income inequality and social exclusion remain at the root of poverty.