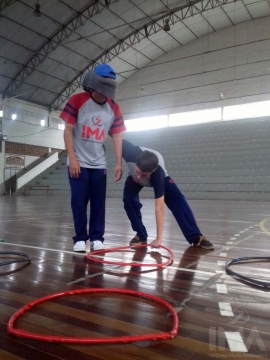 (MissionNewswire) Professor Luiz Thimotheo, a physical education teacher at the Salesian Institute María Auxiliadora in Rio do Sul, in the state of Santa Catarina, wanted to teach his students what it was like for other students who are faced with a physical disability. The goal was to both educate them about disabilities and allow them to experience a simulation of it firsthand to drive home the importance of inclusion.

The dynamic, educational and recreational activities Professor Thimotheo introduced were aimed at transforming physical limitations into recreational challenges meant to encourage his primary and secondary students’ active participation and to raise their awareness of the issue. He challenged them play volleyball while sitting, kneeling during football, dancing while sitting in a chair and other games of a similar nature.

“In addition to clarifying the meaning of the word disability, there is a need to explain the weight of prejudice that is often added to the use of the term when mentioning a person with special needs, and this becomes better understood if we live with these difficulties and limitations ourselves,” says Professor Thimotheo. “And there is no better place to learn it than during physical education lessons, because here we are able to transform and adapt these limitations into games, dynamic and recreational activities, transforming a serious issue into games, with no loss of respect or attention to the problem.”

It is estimated that there are more than 24 million people in Brazil with some kind of disability. In 2008, Brazil ratified the United Nations Convention on the Rights of Persons with Disabilities, as well as the Optional Protocol. In an effort to defend and guarantee decent living conditions for all people with disabilities, the Convention provides for systematically monitoring the situation and the day-to-day advances in human rights, enabling Brazil to report its situation and to recognize, with courage, that despite the work done to date, there still remains much to do.

UNICEF notes in its State of the World’s Children 2013: Children with Disabilities report that studies across countries show a strong link between poverty and disability, which in turn is linked to gender, health and employment issues. The report further suggests that inclusion in mainstream schools and educational settings is usually most appropriate for children with disabilities and when teachers and personnel are trained to consider disability-related issues, they look upon inclusion of children with disabilities more positively.

Salesian missionaries provide education, workforce development and social services across Brazil. They are focused on helping poor youth, including street children, to have their basic needs met and gain an education to have the employment and life skills to break the cycle of poverty and live productive lives.

Brazil has one of the strongest economies in Latin America and is an important agricultural and industrial power in the region. Just over 15 percent of Brazilians live in poverty, with the majority living in the rural northeast of the country, according to the World Bank. While Brazil is making positive changes, there are still large gaps between the poor and the rich and issues of income inequality, and social exclusion remain at the root of those in poverty.