BRAZIL: More than 60 youth with disabilities experience hippotherapy thanks to collaborative partnerships with Don Bosco Institute 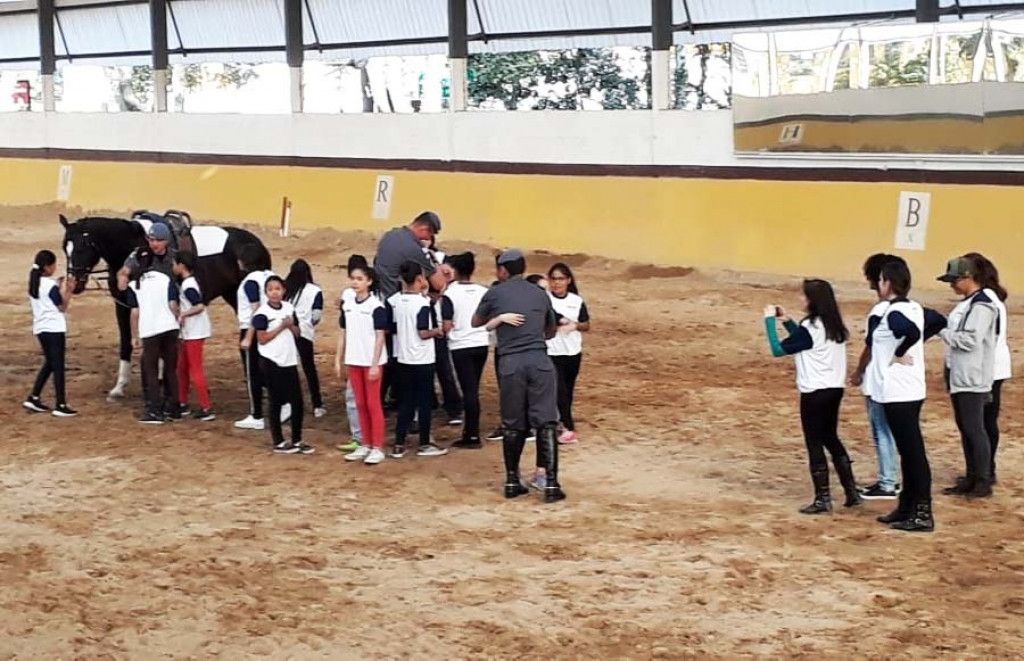 (MissionNewswire) More than 60 children with disabilities and special needs from the Don Bosco Institute in São Paulo, Brazil, recently took part in the Gira Mondo project facilitated by the Hippotherapy Research and Development Center, the Horse Police Regiment and the São Paulo Military Police. Hippotherapy is the use of horseback riding as a therapeutic and rehabilitative treatment to improve coordination, balance and strength. This is the third time these groups have collaborated to facilitate this project.

“Children with a disability are less likely to attend school and have less positive social interactions as compared to their peers,” says Father Mark Hyde, director of Salesian Missions, the U.S. development arm of the Salesians of Don Bosco. “The hippotherapy experience for these children in Brazil is an excellent way for them to receive therapeutic treatment while engaging with other children and adults in a supportive environment.”

It is estimated that there are more than 24 million people in Brazil with some kind of disability. In 2008, Brazil ratified the United Nations Convention on the Rights of Persons with Disabilities as well as the Optional Protocol. In an effort to defend and guarantee decent living conditions for all people with disabilities, the Convention provides for systematically monitoring the situation and the day-to-day advances in human rights, enabling Brazil to report its situation and to recognize, with courage, that despite the work done to date, there still remains much to do.

Salesian missionaries provide education, workforce development and social services across Brazil and focus specifically on children with disabilities in several programs. Missionaries work to help poor youth, including street children, have their basic needs met and gain an education and the life skills and employment necessary to break the cycle of poverty and lead productive lives.

The World Bank estimates about 28.6 million Brazilians moved out of poverty between 2004 and 2014. But from the start of 2016 to the end of 2017, the World Bank estimates that 2.5 million to 3.6 million have fallen back below the poverty line earning less than 140 Brazilian reais per month. Economists blame high unemployment, near 13 percent, and cuts to key social welfare programs for challenges in the country.

Issues of income inequality and social exclusion remain the root causes for those in poverty. Inequalities also exist in access to education and educational efficiency. These inequalities are greatest for children and youth who are poor, live in rural areas or who have an incomplete compulsory education. Salesian missionaries working with poor youth and their families in Brazil develop programs to provide youth with opportunities for furthering their education and skills.